OUIK > Events > Collaborative research > Noto > Reflecting on the World and the Noto Region through Food: The Potential of Satoyama and Satoumi of Noto

Reflecting on the World and the Noto Region through Food: The Potential of Satoyama and Satoumi of Noto 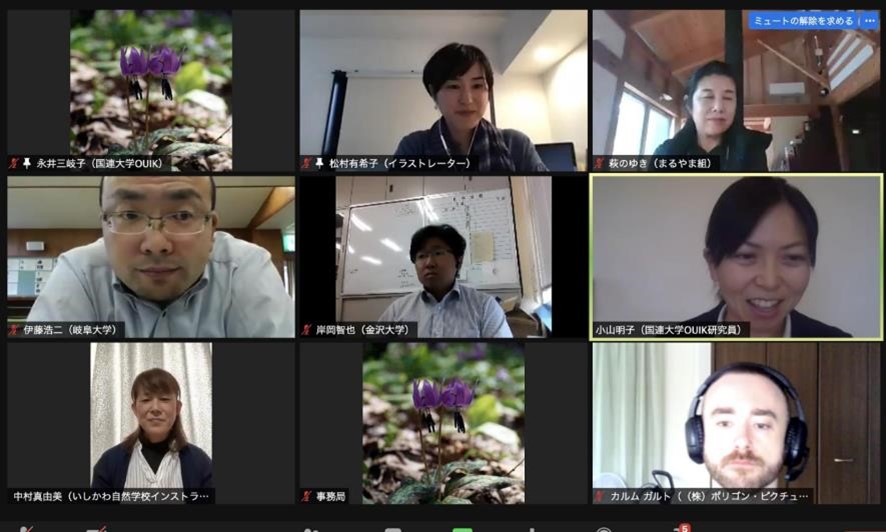 On 16th December, designated as World Food Day by the United Nations, to commemorate the release of the animation titled “Let’s Make a Harvest Feast!”—based on a picture book with the same title which explores the close relationship between the local food culture, nature, and agriculture in Noto—OUIK held a webinar to discuss issues surrounding food around the world and Japan, and reflect on the relationship between food and the livelihoods of the local people in the Satoyama and Satoumi of Noto, a Globally Important Agricultural Heritage Systems (GIAHS) site, and its potential as a place for children to learn.

Originally, the picture book was prepared in 2018 as a guidebook to convey the value of the Noto GIAHS,  which comes from a complex relationship between various elements spreading across nine different municipalities, to local children and citizens. The Noto Regional Association for GIAHS Promotion and Cooperation and OUIK worked together to convey the richness and the attractiveness of the local agriculture, nature, and culture to children from the viewpoint of food. This year, to disseminate the value of Noto GIAHS to a larger number of people around the world, an animation was made based on the picture book.

Ms. Akiko Koyama, a Research Associate at OUIK, explained that hopefully, the webinar gave an opportunity to reconsider the value of Noto GIAHS, after reflecting on the situation that more and more people recognise the importance of the transmission of traditional knowledge and diversified production, as the Noto region demonstrates, to the biocultural diversity and food problems of the world.

The webinar consisted of three sessions. The first session was a lecture from Ms. Kae Mihara, Liaison Officer in Japan at the Food and Agriculture Organization of the United Nations (FAO), titled “Issues surrounding foods in Japan and the world”. The second session was a case introduction from Ms. Yuki Hagino, of the Maruyama-gumi group, about the SDGs Mii’s Feast Project, a programme to implement “Let’s Make a Harvest Feast!” at a local school, Mii Elementary School in Wajima. The final session was a panel discussion titled “Creation of the animation ‘Let’s Make a Harvest Feast!’ and the possible educational activities at Satoyama and Satoumi”, inviting six experts and creators who cooperated to produce the video.

Ms. Mihara represented FAO and explained urgent issues surrounding sustainable agriculture and food security in Japan and around the world. Although the world’s food crisis was thought to be caused by the food production crisis approximately 75 years ago when FAO was founded, Ms. Mihara explained, the situation has become more complicated. A more comprehensive view is now required due to recent concerns about the environment and sustainability in the past few decades.

The existing concerns are various and intricately intertwined. Conflicts, climate change and economic recessions have caused a rise in the number of people in hunger, which had been decreasing until 2014. The balance in the agriculture and food systems has been lost, while obesity, damage to the environment, and food loss and waste have emerged. The impact of Covid-19 is threatening the life security of people in food supply chains. The food supply system in Japan, which depends heavily on imports, must transform its methods of production, distribution, and consumption, and establish a sustainable food supply chain for the food security of people in Japan. The concept of local production and consumption is becoming more crucial in the face of the Covid-19 crisis.

Ms. Mihara also emphasised the contribution of GIAHS to local food security and livelihoods in rural areas. GIAHS, which FAO launched in 2002, is a programme to encourage the designation and conservation of globally remarkable agricultural production systems to be inherited by future generations and to adapt to the change of environment for regional development. Notably, GIAHS regions have formulated and maintained sustainable agriculture production systems for ages, and contribute significantly to food security and livelihoods in rural areas. Ms. Mihara expressed her hopes that the Noto GIAHS, one of the first regions in Japan to be designated as a GIAHS, will continue the current activities in Satoyama and Satoumi in Noto, and convey its remarkable value to the world and contribute to international cooperation through hosting study tours.

Ms. Hagino, an advisor for the project to prepare the picture book, “Let’s Make a Harvest Feast!”, talked about her experience at a local elementary school to use the book as an educational tool.

Ms. Hagino is an activist who implements the concept of the Noto GIAHS in the Noto region. One of her activities is to provide a place of learning firmly rooted in the local region. Welcoming a lot of participants with various backgrounds, Ms. Hagino conducted monitoring surveys on the local flora. Along with the participants, she also collected and shared indigenous knowledge in the lives and traditional agricultural methods and festivals of the local people.

In 2019, she held a series of classes and a field trip at a local elementary school, Mii Elementary School in Wajima, by using the picture book, “Let’s Make a Harvest Feast!” and issued a report titled “Annual Report for SDGs Mii’s Feast Project”, which summarises the activities in the classrooms. She perceives that, in the traditional lifestyles of the local communities, food is not only associated with eating, but also an entire cycle of actions related to food including seeding, cultivating, mowing, boiling, and dedicating foods to deities. However, such a unique understanding of food rooted in local lives disappears as biodiversity is threatened around the world. Thus, she decided to implement the Feast Project with school children to record local things associated with food to pass them on to future generations.

The first lesson in May started with reading the picture book, “Let’s Make a Harvest Feast!” so that children could first learn about the annual cycle of the harvest feast, the local cuisines, the associated local lifestyles, and their seasonality. This provided the children with the necessary background knowledge to understand the significance of their field trips. After experiencing and learning about the bounty of nature from local people in the fields, in the end in December, the children participated in the local agricultural ritual called Aenokoto and devoted ritual cuisines, for which the children collected the ingredients through the year, to deities of the rice fields. Ms. Hagino recommended the picture book, saying that it is an effective tool for teaching elementary school children of all ages about the local region.

Panel discussion: Creation of the video “Let’s Make a Harvest Feast!” and the possible educational activities at Satoyama and Satoumi

Lastly, a panel discussion was held moderated by Ms. Koyama, where six experts and creators gathered to discuss education in and about Satoyama and Satoumi. The members were Mr. Koji Ito, of the Gifu University Center for Collaborative Study with Community, Mr. Tomoya Kishikoka, of the Kanazawa University Frontier Science and Social Co-Creation Initiative, Ms. Yukiko Matsumura, an illustrator, Mr. Calum Galt, of Polygon Pictures Inc., Ms. Mayumi Nakamura of the Ishikawa School of Nature, and Ms. Hagino.

The panel pointed out three takeaways as the conclusion of the dialogue. Firstly, the produced animation is a charming tool to convey Noto’s GIAHS-designated Satoyama and Satoumi regions. GIAHS doesn’t certify the assemblage of single elements, but rather the connections of various components in the area, including agriculture, culture, and biodiversity. The original picture book conveys the links in an easily understandable and attractive manner. Secondly, it’s important to see the richness of Satoyama and Satoumi as things intimately connected to ourselves. Thirdly, it’s essential to have common goals among the various stakeholders concerned. One of the problems in the Noto region is that activities to pass on the living wisdom of Satoyama and Satoumi to children are ceasing due to the change in the family structure. Thus, educational institutions are vital to bridge people who know the wisdom and school children, gaining support from the public and private sectors.

Finally, at the end of the webinar, Mr. Tsunao Watanabe, Director of OUIK, highlighted the importance of reviewing and learning the inherited wisdom which has leveraged the resources in Satoyama and Satoumi as well as the harvest feast together with children to conserve, use, and pass on the Satoyama and Satoumi to future generations and promote local production and consumption.