The United Nations University Institute for the Advanced Study of Sustainability, Operating Unit Ishikawa Kanazawa (UNU-IAS OUIK) was established in April 2008. It replaced Ishikawa International Cooperation Research Center (IICRC), to become the only field unit of the United Nations University Institute of Advanced Studies (former name) in Japan. OUIK is a unique organization that has been operated jointly by the Japanese regional governments of Ishikawa Prefecture and Kanazawa City, and the organization of the United Nations. Directly connecting regional fields and the world has enabled OUIK to carry out a wide range of activities through innovative approaches that cannot be found elsewhere.

OUIK has contributed to various activities related to the scientific evaluation and preservation of ecosystems. We analyzed the transition, actual condition, problems and future prospects of Satoyama and Satoumi in the “Satoyama-Satoumi Assessment: JSSA” project (2007-2010). This was the first scientific evaluation of the biological diversity and ecosystems in Japan’s Satoyama and Satoumi, and the first evaluation of their relationships with the traditional culture and rich life in the communities. The results were reported in 2010 at the 10th Conference of the Parties to the Convention on Biological Diversity (COP10) in Nagoya. The report provided scientific information that can be the basis for the SATOYAMA initiative in the COP10 resolution. We also prepared the Hokushin-etsu Cluster Report in collaboration with Kanazawa University, local governments such as Ishikawa Prefecture, and experts in the field.

In 2011, we participated in the global kick-off event for the United Nations Decade for Biodiversity held in Kanazawa, Ishikawa. Along with Ishikawa Prefecture and Kanazawa University, we took on the important role of defining Ishikawa’s Satoyama and Satoumi as a model of “Coexistence of People and Nature,” which is advocated by the Japanese government.
This year, “Noto’s Satoyama and Satoumi” was designated as a Globally Important Agricultural Heritage System by the Food and Agriculture Organization of the United Nations (FAO). As the first such designation in an industrialized country, it facilitated international awareness of the Japan’s Satoyama and Satoumi. In 2013, Ishikawa Prefecture hosted the 4th International Forum on Globally Important Agricultural Heritage Systems. While Ishikawa has been raising its international profile, OUIK has supported the prefecture in terms of research and global networking.

Along with Noto Peninsula, the Mt. Hakusan area in southern Ishikawa (which extends into Gifu, Fukui and Toyama prefectures) was designated as a UNESCO Biosphere Reserve in 1980. The designated area has been expanded to include a “transition zone” where economic activities that harmonize with nature are allowed. In collaboration with the Hakusan area, OUIK is supporting global dissemination of information about regional research and activities, and participation in international networks.
Kanazawa City is member of UNESCO Creative Cities Network for craft folk art to revitalize the city by cultural creativity. At UCCN Kanazawa 2015 Network Meeting, OUIK organized memorial symposium [The Ishikawa-Kanazawa Biocultural Region-A model for linkage between biological diversity and cultural diversity]

In addition to the above regions, Ishikawa Prefecture has many areas where abundant ecological and cultural resources have been preserved by local residents. One example is Katano-kamoike Pond in Kaga City, which is on the list of Ramsar Wetlands of International Importance. The principle of the Ramsar Convention, namely, conservation and sustainable utilization of wetlands, has been practiced by the local residents.

OUIK is engaged in community-based research to preserve Ishikawa’s globally appreciated abundant nature and culture, so that they can be handed down to future generations. We will disseminate the results of our research globally, as a regional model for sustainable development of our society, and contribute to international discussion and problem-solving from this region.

Aiming for the comprehensive preservation of biocultural diversity in Ishikawa

Ishikawa’s Satoyama and Satoumi have not only produced the food culture, traditional crafts, architecture and landscapes of each region; they have also facilitated the development of the urban culture of Kanazawa for generations. In addition to promoting level collaboration among regions, OUIK seeks a new, creative relationship between the city and Satoyama-Satoumi that goes beyond the conventional relationship of a supply area and a consuming area. We are disseminating information on Ishikawa, with its abundant nature and culture, as a model of preservation of biocultural diversity to the world through our research activities. Our research activities can be divided into the following three areas: 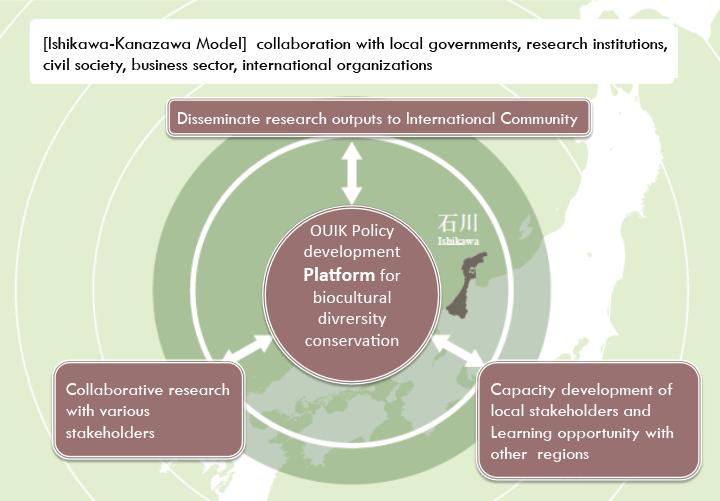 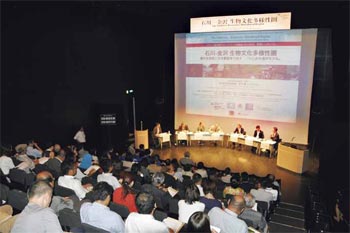 Discussion on how to link Ishikawa’s biocultural initiatives with international framework with invited speakers from UNESCO and the Secretariat of the Convention on Biological Diversity and University of Florence (May 28, 2015)

Each region of Ishikawa is conducting activities in the global framework. “Noto’s Satoyama and Satoumi” has been designated as a Globally Important Agricultural Heritage System, and the Mt. Hakusan area is on the list of UNESCO Biosphere Reserves (Hakusan Tedorigawa Geopark is to be approved as an official UNESCO program in 2016). Kanazawa City belongs to the UNESCO Creative Cities Network, and hosted the first international conference of the network in Japan in 2015. OUIK will support regional activities through our research and networking, and carry out activities in collaboration with the “Linking Biological and Cultural Diversity” Programme jointly implemented by UNESCO and the Secretariat of the Convention on Biological Diversity. Thus, we will present Ishikawa to the world as a practical model for the conservation of biocultural diversity. Also, we will strengthen our collaboration with foreign researchers who are engaged in, or wish to be engaged in, research of Japan’s Satoyama and Satoumi and socio-ecological production landscapes. 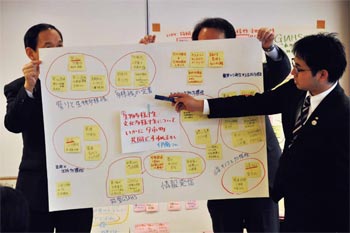 As previously mentioned, Ishikawa boasts abundant, globally recognized natural resources. We are conducting research and carrying out projects regarding the utilization of resources in collaboration with regional government bodies, academic institutions, students and local residents. In Noto, we are preparing an ecological-evaluation map, supporting the revision of action plans after the GIAHS designation, conducting research on the relationship between Satoyama and Satoumi, and implementing the Satoumi movement project, which focuses on business in Satoumi. 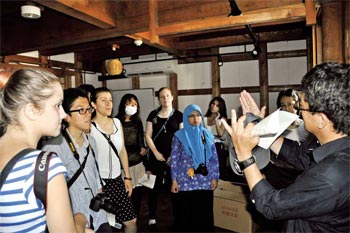 With Kanazawa City, we collaborated for the “Cities and Biodiversity” project, and presented the “Ishikawa-Kanazawa model” as a model for the global trend of biocultural diversity at the international symposium of the UNESCO Creative Cities Network. Also, we drew up a map of Kanazawa’s nature and culture to facilitate visualization of the relationship between ecosystem service and culture in Kanazawa. We are holding workshops to gather opinions, and proposing policies in order to include a Kanazawa-style perspective for the conservation of biocultural diversity in Kanazawa’s biological conservation strategies. 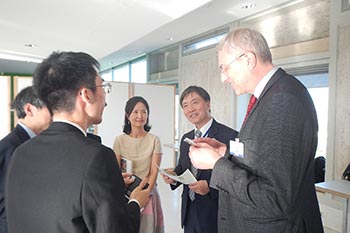 Contribution to international networking for UNESCO Biosphere Reserves at the UNESCO International Co-ordinating Council of the Man and the Biosphere (MAB) Programme (Paris, France) (June 2015)

In the Mt. Hakusan area, we are collaborating with local communities to apply for expansion of the UNESCO Biosphere Reserves through facilitating their participation in international networks, holding international symposiums, and conducting joint research.

3) Development of Human Resources: Global promotion of the value of regional resources

In the future, there will be an increasing need for regional activities and opinions of local residents and young generation in order to implement international conventions and agreements such as the Convention on Biological Diversity and Sustainable Development Goals (SDGs). There is an urgent need for personnel to be taught the significance of regional biological and cultural diversity, and for it to be reflected in primary industries, tourism, the food industry, school education and local government policies. OUIK will help train people to work as a gateway between regional communities and the international community, to directly connect both of these, and to communicate the value of regional resources to the international community. 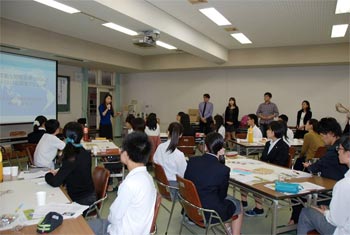 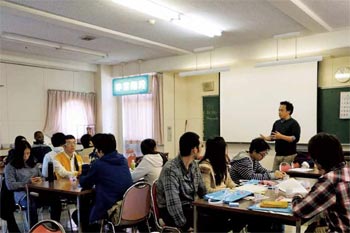 OUIK welcomes interns. In principle, the period of internship is a minimum of three months; however, the time and period will be discussed individually according to your purpose and needs. Although our main field of research is biodiversity, our activities cover a wide variety of areas, and we welcome students in various fields of study. If you are interested, please contact

. We accept both undergraduate and graduate students.