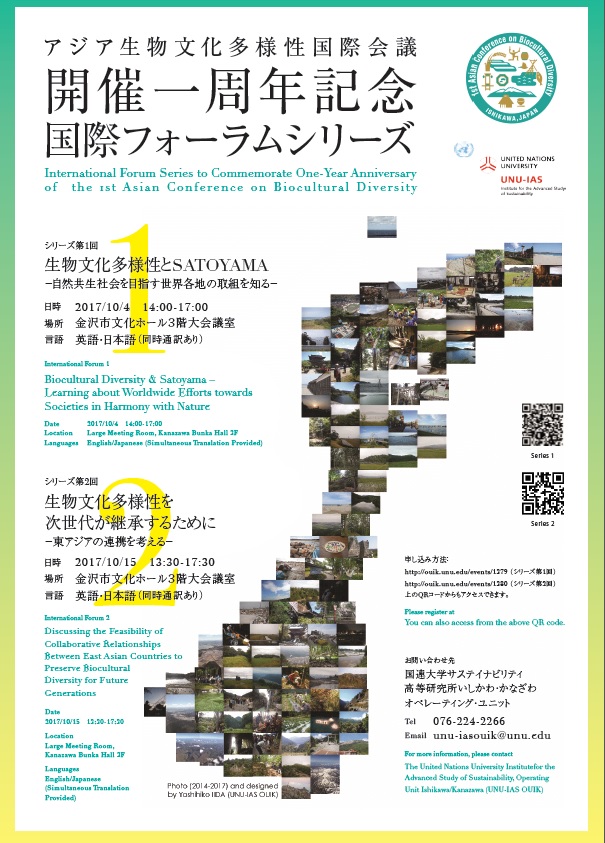 At the 1st Asian Conference on Biocultural Diversity held in October 2016 in Nanao Ishikawa, the participants mutually recognized that local wisdom about sustainable use of natural resources and biological diversity are strongly linked. During this conference, we discussed policies to realize societies that coexist with nature by utilizing diverse natural and cultural resources of local communities. The Ishikawa Declaration, which states various approaches taken by national and local authorities, international society, and the academic community, at their own level, to support the sustainability of local communities, was adopted at this conference. To commemorate the one-year anniversary of the 1st Asian Conference on Biocultural Diversity, we will explore the measurements to further promote the Ishikawa Declaration with international initiatives and East Asian partner.

The second forum will be held celebrating the East Asian Members’ Assembly of the International Union for Conservation of Nature (IUCN) in Kanazawa. In this forum, we will discuss the East Asian biocultural diversity issues and explore with youth how we can pass on the biocultural diversity to the future generations contemplating each case study presented by the representative from Japan, China, and the Republic of Korea.

Kanazawa City was selected as “Culture Cities of East Asia” for next year, 2018. It is highly expected that this selection will accelerate solidarity among three countries, Japan, China, and Korea, through culture. This forum will bring the opportunity to discuss the feasibility of collaborative relationship between East Asian countries in the context of preservation of biodiversity and cultural creativity.

Japanese-English simultaneous translation will be provided

Cases from China, Korea, Japan and Report of the Youth session at The Tripartite Environmental Ministers Meeting Among Japan, China and Korea (TEMM) to discuss how to  enhance the youth partnership  among the three countries.