In April 2018, OUIK hosted Biocultural walking workshop proposed by Stockholm Resilience Center and IR3S, the University of Tokyo. Prominent international researchers from different continents joined the workshop to experience how biocultural resources could be understood, elaborated and promoted under the current changes occurring urban and rural areas in Japan.

Here is observation by  Viveca Mellegård, Stockholm Resilience Center.  「Reinvigorating creative solutions to save people and planet: A walking workshop through biocultural landscapes in western Japan」

UNU-IAS OUIK reported progress of the Ishikawa Declaration, which is approved by the 1st Asian Conference on Buicultural Diversity, at Nature and Culture Summit . 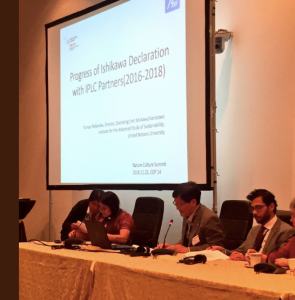 Active dialogue t integrated conservation and local nature and culture as well as to promote rights of indigenous people and local community over the natural resource was exchanges. at the summit.

Presentation materials are available from here.

‘Noto’s Satoyama and Satoumi’ which stretches over nine municipalities in Noto Peninsula of Ishikawa Prefecture was designated as one of the Globally Important Agricultural Heritage Systems (GIAHS) in 2011 together with Sado Island. They were the first designations from developed countries. Since then, United Nations University has been carrying out various activities together with Ishikawa Prefecture, nine municipalities, and local people of the region. At the GIAHS International Coference 2013 , it was suggested to strengthen the cooperation between the GIAHS in developed countries and those in developing countries by Noto Communiqué. In the following year, 2014, Ishikawa Prefecture established a training program thorough which participants can learn about conservation and utilization of Noto’s Satoyama and Satoumi and its regional development. It has accepted trainees from six different countries so far, including Bhutan, Indonesia, and Laos.

This program has just taken a step further. An international cooperation program was established to bring about mutual-leaning: to enable trainees from developing countries to learn ‘sustainable regional development’ in Noto’s Satoyama and Satoumi on site; and also to enable people in Noto region to realize the global values of sustainability thorough their contribution to this training program. FAO, JICA Hokuriku Branch Office, Kanazawa University, Ishikawa Prefectural University, Ishikawa Prefecture, and UNU-IAS have joined the program as implementing bodies.

The official web-site on 1st Asian Biocultural Diversity Conference has been launched by Ishiksawa Prefecture. Registration for oral and poster presentation is now open. We are looking forward to the participation from various regions from Asia.