OUIK > Events > Collaborative research > Noto > 【Event Report】GIAHS Youth Summit and Excursions, a side event of the International Conference on GIAHS

【Event Report】GIAHS Youth Summit and Excursions, a side event of the International Conference on GIAHS 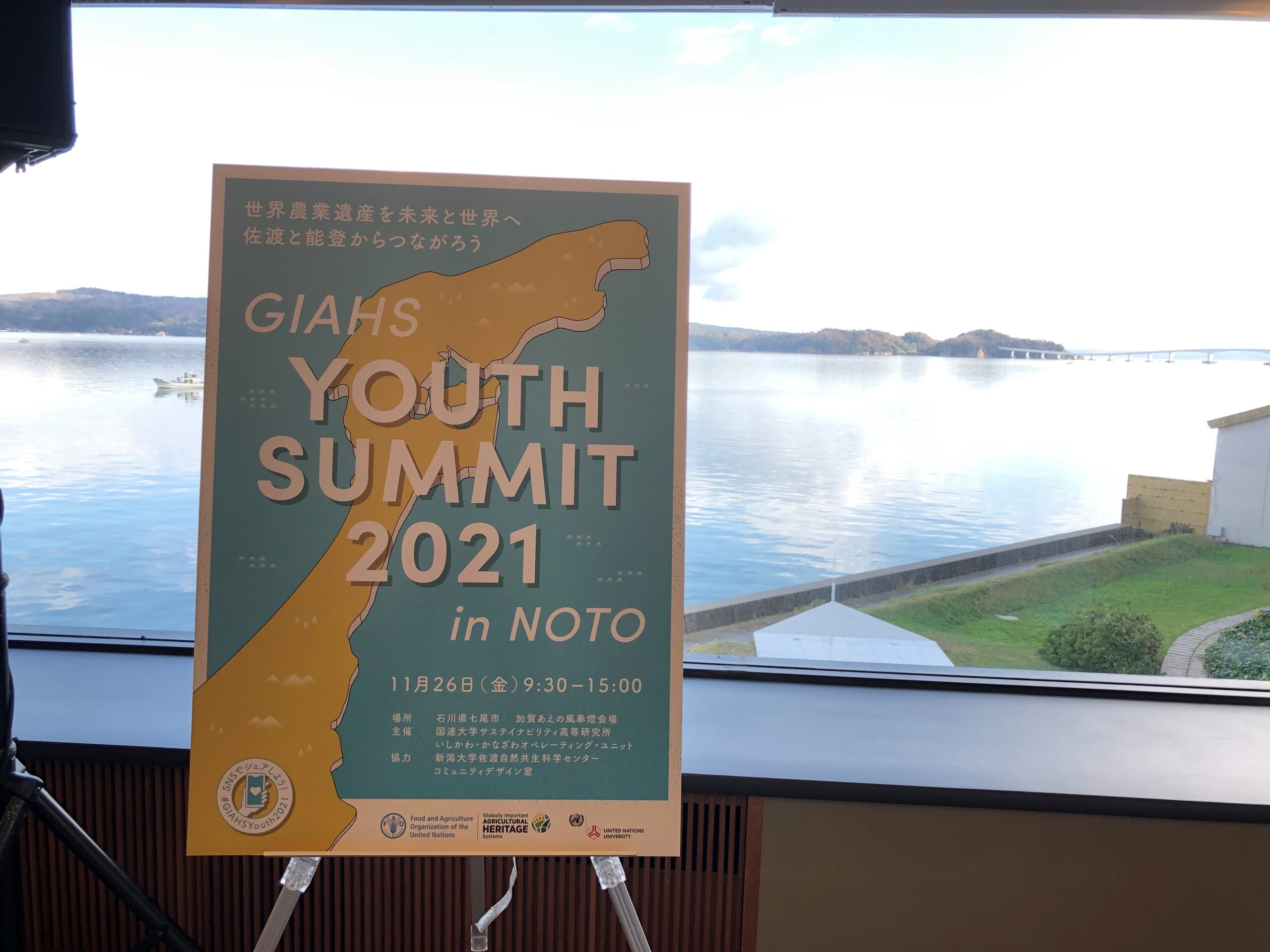 Session 1 “Letʼs Shape the Future of Globally Important Agricultural Heritage Systems That We Want to Pass on” was divided into four themes: (1) Biodiversity in agriculture and environmental conservation at Satoyama-Satoumi, (2) Revitalization of the local economy, (3) Succession and development of the local culture and (4) Succession and dissemination of the knowledge about GIAHS, and group discussions were held. The students introduced the characteristics and activities of each region related to each theme, and discussed the value of these activities and why they should be passed on to the future. At first the high school students were a little nervous to be in a session with new friends from inside and outside of the prefecture, but they gradually got to know each other by introducing about each other.
At the end of the session, based on the opinions raised during the discussion, the students developed an action plan to protect the GIAHS in their own area and to pass on the local culture, which they compiled into the GIAHS Youth Declaration. During the lunch time, the participants enjoyed the “GIAHS Experience Lunch Box” produced by the Home Economics Club of Ishikawa Prefectural Rokusei High School with a presentation by the members of the club. This GIAHS lunch box was thoughtfully created for the summit participants to experience GIAHS. More than 40 different ingredients produced and harvested locally in the Noto GIAHS were used in the lunch box. Local delicacies such as kabura-zushi and iwanori seaweed from the Noto sea were presented as well. The Senegalese ambassador to Japan was amazed by the fact that all the food was local and made from local ingredients and praised the high school students for their commitment, saying “You are ambassadors of GIAHS”. In the afternoon, the ambassadors from countries with an interest in GIAHS joined the students in Session 2, “Letʼs Share the Future Globally Important Agricultural Heritage Systems That We Want to Pass on”, where they presented the results of Session 1 and the ambassadors gave presentations. Representatives from each group of high school students presented what actions they would like to take to ensure the values of GIAHS in their region to be passed on to future generations. They also told us with great enthusiasm how they would like the adults to help them. Meanwhile, the participating ambassadors introduced their country’s local assets such as nature, landscape, agriculture, food and traditional culture. After the presentations, perhaps a little shy to ask questions in the audience, the high school students communicated with the ambassadors individually and asked them about the youth activities in their countries and their interest in the SDGs and climate change. In addition, Mr. Masanori Tanimoto (Governor, Ishikawa Prefecture), who came to the conference during this session, gave us an encouraging comment, “I have high expectations for the community activities at GIAHS, especially for the younger generation in the future”.

After Evonne Yu (UNU-IAS OUIK) gave the closing remarks of the summit, the students headed to the main venue to present the GIAHS Youth Declaration at the closing session of the conference. The five high school students representing each school reported on the GIAHS Youth Summit and announced the GIAHS Youth Declaration, which was applauded by the audience. On the following day, the 27th, an excursion tour for the summit participants was held in cooperation with the Noto DMC. 10 of the students from the Niigata Prefectural Sado General High School and the Miyazaki Prefectural Gokase Secondary School and their teachers joined the tour to expose the students to the key features of Noto’s Satoyama and Satoumi Globally Important Agricultural Heritage System (GIAHS) so they may increase their knowledge about the GIAHS and recognize the value of agricultural heritage systems more broadly. This activity specifically built on one of the commitments the students made at the end of the Youth Summit: to “find opportunities for hands-on experiences and deepen [their] understanding of GIAHS.”

To that end, the tour consisted of site visits and experiences designed to illustrate for students the five key criteria of GIAHS: 1) food and livelihood security; 2) agro-biodiversity; 3) local and traditional knowledge systems; 4) cultures, value systems, and social organizations; and 4) landscapes and seascapes features. The tour kicked off with a visit to the Noto Satoyama and Satoumi Museum for an overview of the history, notable traditions and cultural practices, and key environmental features of Noto. The students continued on to a local, family-owned oyster farm: Miyoshi Fisheries Oyster Farm, to experience life in the Satoumi—that is, a personal exposure to the industry through conversations with people who have been in the business for decades, hands-on experience in cleaning oysters, and a special lunch full of freshly harvested oysters provided by Hamayaki Noto Fudo. Lunch was followed by a brief stop at Hosokawa Farm in Shika Town to learn about “Noto Shika Korogaki (dried persimmon)” making, which uses the bounty of the satoyama at this time of year. This industry also faces a serious succession problem like many other industries in rural areas. Mr Hosokawa, the owner of the business said “In GIAHS sites, there are many industries and products that have their own stories, and I hope that the young people like you will have many experiences and come back to your hometown in the future to make use of them”. The students then moved to the Satoyama Marugoto Hotel where students enjoyed a relaxed conversation with the owner who had moved from Tokyo to Noto and started a restaurant business that uses local produce and ingredients. The high school students exchanged ideas and opinions, such as “I would like to run a restaurant using local ingredients as a school project”.
The students wrapped up the tour at the Shiroyone Senmaida, overlooking the thousand rice paddies of Shiroyone town in Wajima City that comprise a key landscape feature of the Noto’s Satoyama and Satoumi GIAHS. On the way back to their respective final destinations, the participants shared their impressions and discoveries of the past two days. The students said: “I had a precious opportunity to meet local people and deepen my knowledge about GIAHS”, “I found out that the most important thing for the GIAHS region is “people”. I would like to make use of this experience to contribute to the region in the future”, concluded the excursion.