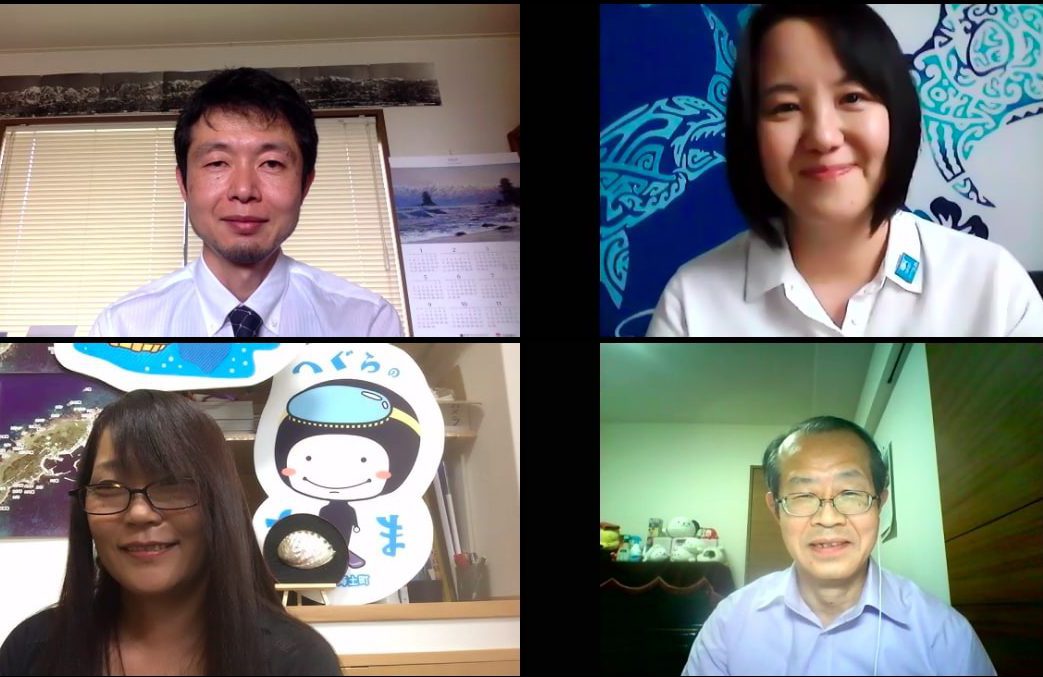 The 1st Noto Satoumi Seminar was held online with the theme of “Achieving SDG 14 in the Context of Preserving Satoumi: Considering the Problem of Marine Pollution.” At the seminar, we deepened our understanding of  SDG 14.1 (By 2025, prevent and significantly reduce marine pollution of all kinds, in particular from land-based activities, including marine debris and nutrient pollution), one of the ten targets of SDG 14 (Conserve and sustainably use the oceans, seas and marine resources for sustainable development).

First, to kick off the seminar Evonne Yiu (UNU-OUIK Research Associate) gave a presentation on the topic of “Noto’s Satoumi Movement and SDG 14.” Marine pollution is a complicated issue with many causes, including the plastic waste problem which has been a common topic in recent years, as well as industrial chemical dumping, waste produced by the livestock industry, and chemical waste from consumer products, all of which flow from land to sea, causing marine pollution. “It’s important not to increase the amount of marine waste, but we’re getting to the point where we should start thinking of how to re-use that waste material. Also, it is important that innovation not just be limited to technological innovation for developing new re-usable products; we also need intellectual innovation in the form of education reform,” Evonne explained.

Next, Yutaka Michida (Professor, University of Tokyo Atmosphere and Ocean Research Institute) talked about the topic of “Problems with Marine Plastic and Related Research Prospects.” Professor Michida’s research mainly focuses on surface-level ocean currents and shifts in their patterns, and as an extension of that research he also surveys the plastic waste carried by said currents. He explained in detail the problem of microplastics, which has been a popular topic in recent years, and how exactly plastic waste flows into the oceans.

Next, Makoto Urata (Senior Researcher, The Institute of Noto Satoumi Education and Studies) gave a presentation on the topic of “Considering Children’s Marine Learning: Environmental Education at the Institute of Noto Satoumi Education and Studies,” in which he shared some of the Institute’s activities. Having local fishermen and experts come in person to classes to talk is a highly effective method of marine education, and the Institute coordinates classes by acting as a go-between for the guest speakers and the schools. Urata went to on to talk about the direction of marine education in the future, saying, “It’s important to pursue a more independent, conversational kind of education in which children are allowed to find what interests them and study it themselves.”

Finally, a panel discussion was held on the topic of “What We Can Do to Achieve the SDG 14.1 Target of Reducing Marine Pollution,” moderated by Research Associate Evonne. Chiharu Hayase, an Ama diver (free-diving female fisher) of the Wajima Ama Diver Preservation Society, joined the discussion to say, “The coastline is like an underwater produce field; if the waters along the coast become too acidic, the seaweed that the abalone and turban shells feed on can’t grow. It may be impossible to return the marine environment to how it used to be, but for the sake of the next generation we have to put effort into undoing the damage done by human hands.”

Professor Michida ended the discussion by saying, “As a researcher, I want to work to create a world in which we can debate these issues from a scientific perspective. Instead of people thinking, ‘I can’t do anything by myself,’ I would like them to be aware that their effort is meaningful, and that they should diligently do what they can.”

In his closing remarks, Tsunao Watanabe (Director of UNU-OUIK) reviewed what was discussed and said, “It is vital that we all share the experiences and thoughts of those whose lives are connected to the Satoumi and ensure that what we have learned is reflected in our individual actions in order to protect the bounty of the ocean.”