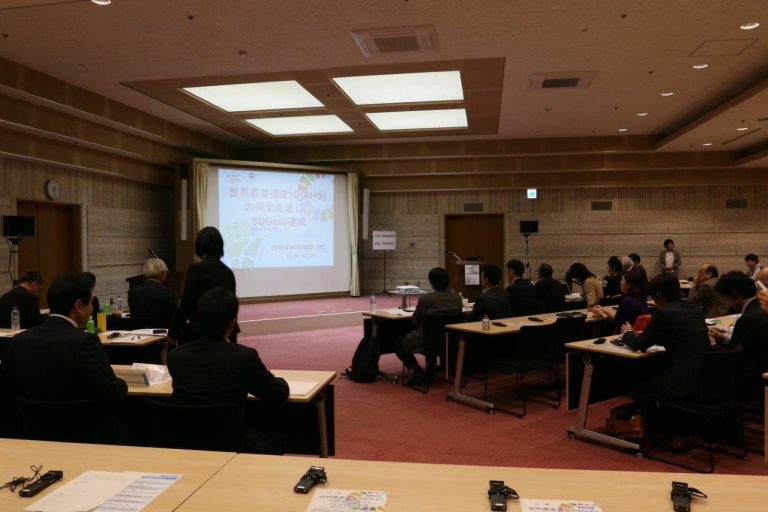 On October 30, 2019, a Japan-Korea International Conference titled “Achieving SDGs Through the Conservation of GIAHS” was held in Kanazawa city.

A joint 3-year project between the United Nations University Institute for the Advanced Studies of Sustainability (UNU-IAS) and the National Institute of Agricultural Sciences of Korea Rural Development Administration (RDA) commenced in January 2018 to conduct comparative research on the “Globally Important Agricultural Heritage Systems (GIAHS)” designated by FAO and the Nationally Important Agricultural Heritage Systems (NIAHS) in Japan and Korea. The Conference was held as part of this joint project to share experiences from both countries on the GIAHS designation’s impact and conservation challenges, with a particular focus on the relevance of GIAHS conservation in the achievement of the UN Sustainable Development Goals (SDGs).

In his opening remarks, UNU-IAS OUIK Director Dr. Tsunao Watanabe introduced GIAHS-related efforts in the Noto region of Ishikawa Prefecture. He urged the participants to think creatively on how GIAHS, with 57 designated sites in 21 countries, can contribute to the SDGs in the future.  He added that agriculture and biocultural diversity would likely be an important theme at the 15th Meeting of the Convention of Biological Diversity Conference of the Parties (CBD COP15), to be held in Kunming, China next year, and expressed UNU-IAS OUIK’s commitment to raise awareness of GIAHS and promote further discussions on GIAHS stakeholders in various countries.

Dr. Dae Yong Hwang, senior agricultural researcher at RDA, also gave opening remarks, including condolences to the victims of Typhoon Hagibis and reports on the activities of GIAHS and NIAHS in Korea. He informed the Conference that the first international conference for the joint project was held in Korea last year, and that following the hosting by Japan this year, a final conference will be held next year in Korea. He stated that he looked forward to the fruitful discussions from this Conference, which he believed would be beneficial to current ongoing research.

In the first keynote lecture, UNU-IAS Academic Program Director Dr. Osamu Saito gave a lecture entitled “The Future and Sustainability of Satoyama-Satoumi”. Dr. Saito has been conducting research to explore the relationship between social capital and dietary habits through the “Survey on the Proportion of Self-Consumption in the Diet” and the “Survey on the Culture of Sharing in the Noto Peninsula”. While sharing his analysis of natural capital and ecosystem services in the integrated social and ecological systems in the Noto region, he said that it is important to promote community development based on future scenarios, and to create a community-based recycling society in collaboration with rural and urban areas.

In the second keynote lecture, RDA researcher Dr. Myeong Cheol Jeong gave his presentation on the “Current Status of Conservation and Utilization of GIAHS in Korea”, where he introduced some popular activities of Korean GIAHS sites such as agricultural experience programs, art-related programs, rice field ownership systems, and farm tourism. He stressed the importance of sharing common goals on GIAHS with interest holders from both within and without the region, and stated that he would like to promote the standardization of appropriate regulations and indicators in the future.

In the last keynote lecture, Mrs. Junko Owada, a member of the Japan GIAHS Expert Committee, shared the results of her research on “Activating GIAHS from an SDGs Perspective: Results from the Japan-Korea GIAHS-SDGs Survey”.  According to her findings, all 11 GIAHS regions in Japan are working on SDGs, particularly Goals 2 (Agriculture) and 15 (Life on Land). Although there are variations depending on the region, she expects to see that Goals 6 (Water) and 12 (Responsible Production and Consumption) will be given more emphasis in the future.

After the break, a series of GIAHS experiences were presented.  Firstly, Mr. Naoyuki Kaneda, Director of the Planning and Finance Section, Suzu City Hall, Japan, presented on “SDGs x GIAHS x Art”. As part of their GIAHS conservation efforts, Suzu City has focused their efforts on education, including conducting biological surveys at all nine elementary schools in the city, and financing the Satoyama Meister diploma programme to nurture a rural workforce.

To raise the profile of the city, Suzu City introduced the triennial Okuno Noto International Art Festival in 2017 to bridge art with rural farming landscapes and seascapes, which was well received. Such efforts led to the selection of Suzu City as one of the “SDGs Future City” in Japan by the Cabinet Office. Suzu City then also established the Noto SDGs Lab in 2018, and continues to work on various initiatives in collaboration with universities and companies. Mr. Kaneda recognized the need to clarify the impact of these efforts on the local economy and how they contribute to the revitalization of the city.

In the GIAHS case study in Korea entitled “Multiple Functions and Utilization of Traditional Tea Farming in Hadong”, Mr. Jong Gon Kim, Head of the Hadong Tea Producers Association in Hadong County, talked about business and hiking course development. He also discussed problems unique to Korea’s leading tea production area, such as the confrontation between traditional tea farmers and farmers who are developing large-scale tea plantations for commercial purposes. He also shared that Hadong will host the World Tea Expo in 2020.

Introducing the case study on Japan’s Nationally Important Agricultural Heritage Systems (NIAHS),  Ms. Tomoe Aota, Deputy Director of the Shiga Prefecture Agricultural Policy Division, Agriculture, and Fisheries Department, spoke about “Lake Biwa System and SDGs”. In 2016, Shiga Prefecture established its Agricultural Heritage Section to promote awareness of Lake Biwa as an ancient lake with 4 million years of history, and its connection with local culture and the surrounding environment, including forests, rivers, paddy fields and lakes. It is currently recognized as a Japanese NIAHS and is applying to become a GIAHS.

In the final case study presentation, Dr. Hag Yeo You, a research committee member at Chungnam Institute, gave a presentation titled “Sustainability of the Traditional Ginseng Agricultural System”. Dr. You said that while it is wonderful to be designated as GIAHS, there are still various challenges for the future. In particular, he pointed out the need to develop indicators for monitoring these systems, and designating who will be responsible for conducting said monitoring. He emphasized that it is necessary to confront these problems by encouraging the participation of local people.

In a panel discussion moderated by UNU-IAS Research Fellow Dr. Evonne Yiu, the speakers, along with Prof. Yoo Jick Lee, Vice President of the Korea Rural Heritage Association, discussed regional revitalization and the contribution of GIAHS to the achievement of international goals such as SDGs. Prof. Lee said that in Korea, SDGs are still mainly taken up by the central and provincial governments, so he was impressed by the efforts of Suzu City at the municipal level. He hopes to see SDGs used as monitoring indicators for the GIAHS action plan in Korea. One of the common issues that GIAHS in Japan and Korea both have is the low public awareness of GIAHS. In response, Ms. Aota suggested that SDGs could be helpful to raise the awareness of GIAHs, as interest in GIAHS amongst companies and civil society in Japan are heightening these days.

Concluding the Conference discussions, Kanazawa University Emeritus Professor and East Asia Research Association for Agricultural Heritage Society (ERAHS) Japan Chairman Prof. Koji Nakamura reflected on the key challenges discussed. Prof. Nakamura stressed that the challenge of GIAHS conservation will only get harder after designation, especially the cycle of monitoring, revision of the action plan, and upscaling that must be addressed with the involvement of all stakeholders in the designated region. To that end, he said that the most important thing is human resource development, highlighting the success of the Meister program in the Ifugao GIAHS, the Philippines,  which he founded and has worked on for many years.

Lastly, Mr. Shinji Terasaki, Director of the Ishikawa Prefecture Satoyama Promotion Office, Agriculture, Forestry and Fisheries Department, gave the closing speech, thanking RDA and the participants, and expressed commitment to further the work of GIAHS, bringing the four-hour conference to a close.