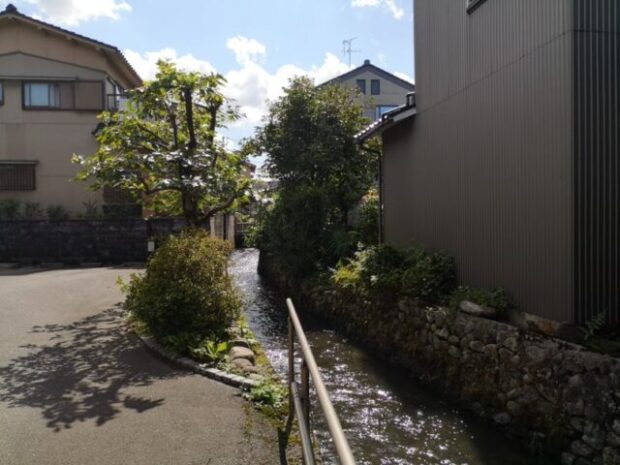 The central area of Kanazawa City, Ishikawa, still retains firefly habitats. In Kanazawa, the number of fireflies had once decreased due to urbanisation and the increase of housing land since the Showa period; however, fireflies are returning to the city due to improvements in canal water quality thanks to sewerage development. Citizen organisations in Kanazawa have conducted surveys on firefly inhabitation for over 30 years. They are working actively to preserve the local nature and its living things, to hand them down to future generations.

On July 2 (Fri), as part of the Sustainable Urban Nature Project (SUN Project) of the United Nations University’s Institute for the Advanced Study of Sustainability, Ishikawa Kanazawa Operating Unit (UNU-IAS OUIK), research associate Juan Pastor Ivars implemented a study tour for citizens to participate in the survey of firefly habitats in Saiwai-cho and Kikugawa. They walked around the areas and examined the banks along the Kuratsuki canal (constructed in the Edo period) and nearby gardens. The tour was aimed at examining firefly biology, while letting participants enjoy the sound of the stream at night and urban nature.

About 15 people, including residents of Saiwai-cho and Kikugawa, participated. During the tour, they were taught about the biology of fireflies by Mitsuhide Shinmura, Vice President of the Kanazawa Firefly Society and Chief of the Ishikawa Firefly Society Secretariat, and Koji Nakamura, Director of Ishikawa Prefectural Museum of Natural History.

Although there are about 2,000 species of fireflies living in the world, we often hear of the Genji firefly and Heike firefly in Japan. These two species have been found in Kanazawa City as well. The participants examined the number of each species living along the canal, based on their size and flashing pattern, which are different for each species.

It is difficult to find flying fireflies on rainy days, since they hide behind the leaves of waterside plants. It was raining a little on the day and the participants could not find fireflies at first. However, by carefully checking over 10 observation points, they were able to find dozens of Genji and Heike fireflies. Also, thanks to the kindness of a participant, they were able to examine the Japanese-style garden of a machiya house in the area. The participants learnt how Japanese-style gardens contribute to the biodiversity and ecosystems of cities, while enjoying the fantastic view of fireflies flying in the garden.

Fireflies have different preferences for food and habitats according to the species. We need to consider various elements in their waterfront living environments: the food such as freshwater snails and river snails, the dirt for making cocoons, and the moss for laying eggs on. Many Kanazawa citizens participate continuously in grass-roots firefly surveys such as this study tour. We hope to continue considering fireflies’ living environments together with citizens while enjoying urban nature next year.

Please read the 30-year Kanazawa Firefly Survey for details on firefly biology and the history of firefly surveys in Kanazawa City.