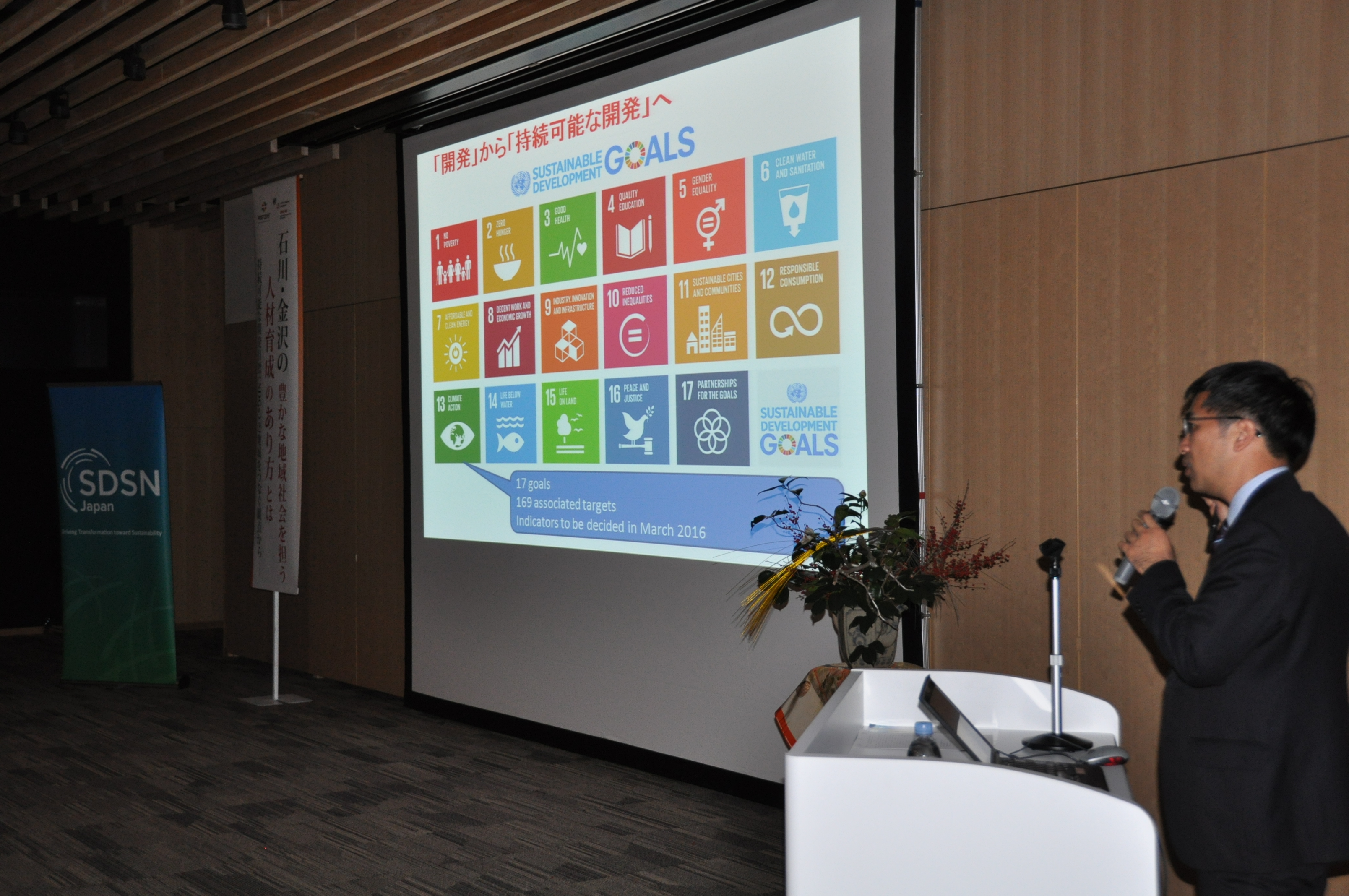 Dr. Norichika Kanie (POST 2015 project leader, Keio University) gave the keynote speech, and explained the background for the adoption of SDGs at the UN summit, as well as the features, problems and possibilities with regard to SDGs as policy tools. MDGs and other international frameworks tend to focus on the dichotomy between developing countries and developed countries; in contrast, SDGs involve all countries and require them to be engaged equally. Dr. Kanie’s comment that every country is a developing country in terms of SDGs was very impressive. Other speakers presented examples of human resource development in different areas of Ishikawa. In his presentation on the Satoyama-Satoumi Meister Project, Dr. Koji Ito (Kanazawa University) spoke about the cultivation of human resources who will hand down Noto’s GIAHS to future generations. Noto’s GIAHS consists of a wide variety of assets that exist in a vast area; therefore, it is often said that Noto’s designation reflected a comprehensive approval of those assets. Dr. Ito said that its first phase had been the process of sharing the scientific and social values of the assets with people around the world, and that in the second phase, we should endeavor to develop various human resources (human diversity) who will take on the job of preserving and developing the assets.

The next speaker, Ms. Nami Moriyama (Misogigawa Co., Ltd.), runs a company involved in a type of urban development focused on Nanao City’s Misogigawa River, which connects people, shops and towns. She gave a presentation on the philosophy of the company and its program for sending student interns to local companies and training both students and company workers.

Mr. Kensei Nishide (President, GAKUTO LAB Co., Ltd.) has been engaged in consultation for students and organizations since he started a student support organization when he was a student himself. He spoke about the activities he has been involved in since the incorporation of his business, which include human resource development through internships and matching company needs for recruitment and students’ job requirements. We hope that many companies, organizations and students will share GAKUTO LAB’s policy of Creating Shared Values (CSV), namely, contributing to the regions by providing young people in Ishikawa with opportunities for playing an active role. We hope that more people will follow Mr. Nishide’s example and become coordinators like him. Mr. Shotaro Koyama (Tokyo University), Komatsu Summer School Board Director, spoke about the summer school. At the summer school, students of leading universities in Japan and the Unites States teach classes of local high school students in order to give them a wide range of perspectives. He spoke passionately about the regional educational problems that motivated him to start the summer school. His opinion as a graduate student was very useful to us. We were impressed by the progressive activities for human resource development that are being carried out in Ishikawa. A panel discussion was held by Mt. Kosuke Terasaka (Planning Division, Ishikawa Prefecture), Mr. Noriki Kakimoto (Citizens’ Collaboration Section, Kanazawa City), Mr. Michio Kojima (JICA Hokuriku Branch), and Ms. Mikiko Nagai (OUIK), with Dr. Kanie as the moderator. During the discussion, the possibility of SDGs being effective tools for regional policy-making was suggested. Some audience members commented that they would like to adopt SDGs as a framework for their activities and discussion. We expect that SDGs will offer an important perspective for our activities. We look forward to continuing working in collaboration with local residents in order to contribute to SDGs from our region.