OUIK > Events > Collaborative research > Kanazawa > SDGs Café #13 “All Citizens Should be Gardeners! Thinking about the Kanazawa SDGs from a Green Infrastructure Perspective.” 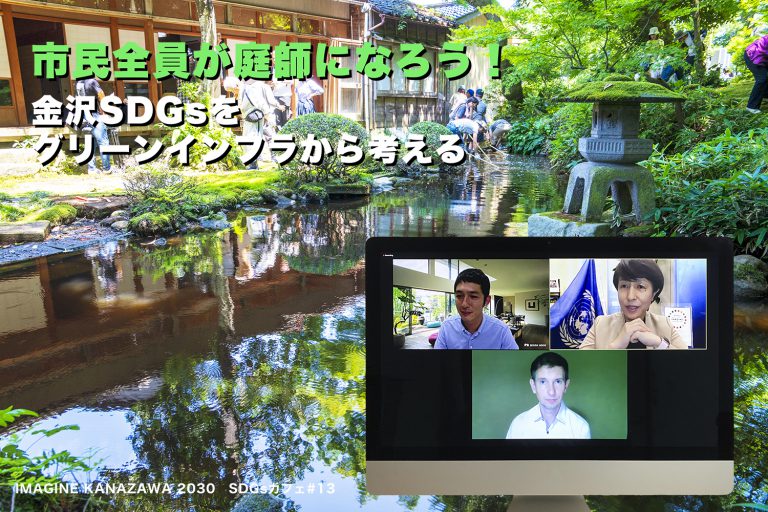 The theme of the 13th SDGs Café was “All Citizens Should be Gardeners! Thinking about the Kanazawa SDGs from a Green Infrastructure* Perspective.”

In 1968, Kanazawa City was the first in the nation to establish a Traditional Environment Protection Law, which stipulated that green spaces and canals within the city must be protected alongside traditional samurai houses, temples, and shrines as part of Kanazawa’s historical cityscape. These preservation efforts continue to this day, and the goal of creating and utilizing green infrastructure is explicitly included in the Kanazawa Future Visions presented earlier this year.

Our guest this time was UNU-OUIK Research Associate Juan Pastor Ivars who has lived in Japan for 11 years since coming from Spain to research traditional Japanese gardens in Kyoto and Kanazawa. Juan aims to develop his research in a way that is rooted in the local region by cooperating with citizens to think about the future of Kanazawa City.

Since 2010, Kanazawa’s population has been declining, while the number of unoccupied homes continues to rise, and the amount of natural space gradually dwindles. In the Kanazawa of 2030 that Juan imagines, unoccupied homes and parking lots would be replaced with green infrastructure, and in order to continue to protect that greenery he proposes that all citizens become gardeners.

The next guest to give us some ideas was green infrastructure expert, researcher, and publicist Takaaki Nishida (Associate Professor, Kyoto Sangyo University, Faculty of Life Sciences, Department of Industrial Life Sciences), who is involved in many different activities, including publishing collections of examples of a wide variety of green infrastructure projects both in Japan and overseas. First, Nishida explained the concept of green infrastructure, an idea that has yet to gain widespread recognition, as follows: “Green infrastructure is defined as a framework in which, rather than focusing solely on protecting nature, we seek to make use of its benefits to promote regional revitalization and prevent and reduce the effects of natural disasters. It’s a way of thinking in which the goal is to use nature’s inherent features to our advantage to benefit both the economy and society, which in turn results in nature becoming enriched as well.”

Next, he introduced several examples of efforts to revitalize unused land with greenery currently being undertaken around the world. He argued that there are many places in Japan where similar projects could be done, saying “For example, finding ways to utilize spaces like abandoned homes or parking lots is an important point. It is also important to engage in discussions and balance the risks and merits of these projects.”Finally, Office Manager Nagai closed the webinar, saying “I hope those who participated today will continue to promote green infrastructure going forward and cooperate with efforts to implement it in Kanazawa in the future.”