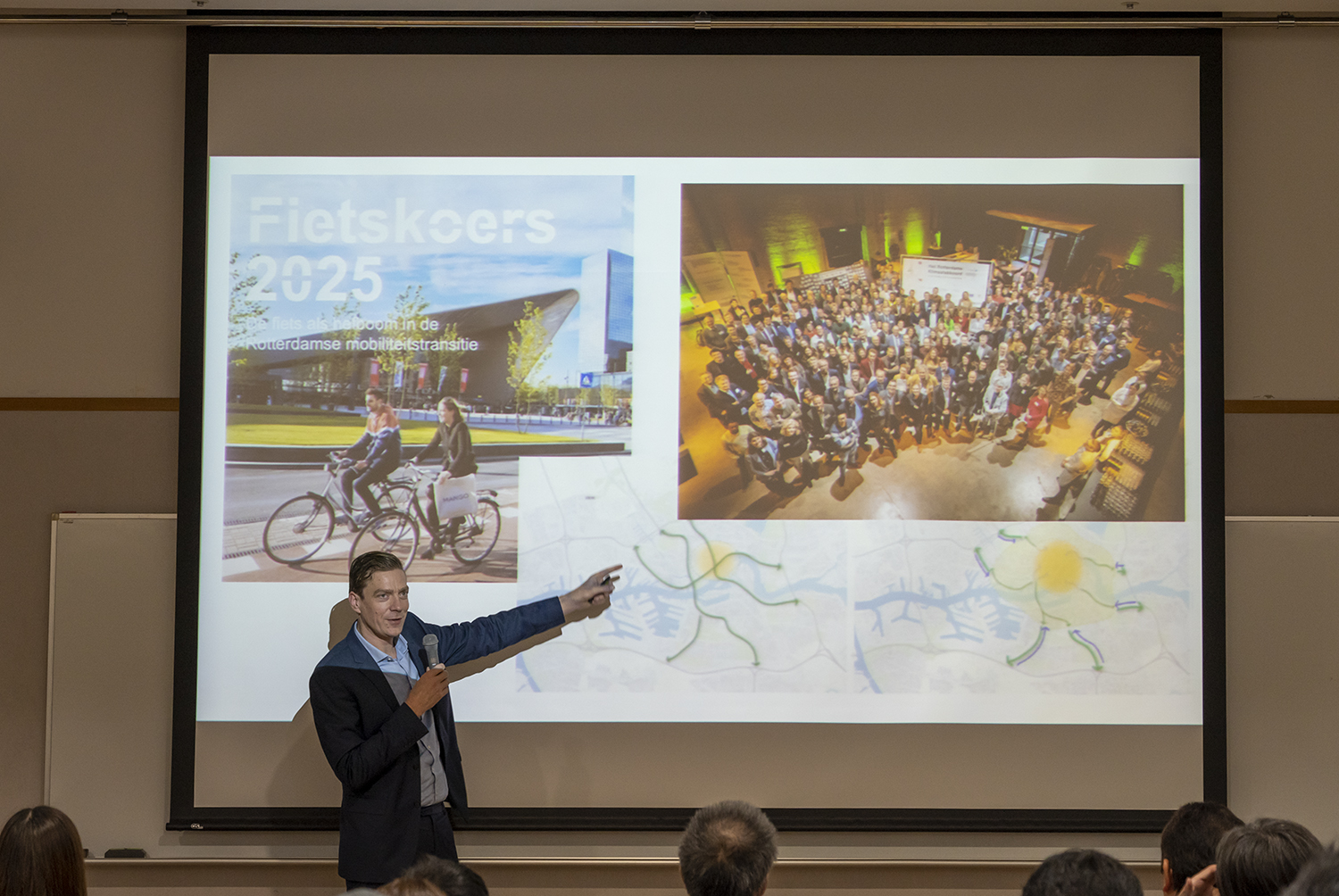 At the ninth SDGs cafe we discussed the question, “how do we want transportation in Kanazawa to be in 2030?”, with particular attention to the happiness of people and the development of attractive towns.

We also welcomed Derk Loorbach (director of the Dutch Research Institute for Transitions and Professor of Socio-economic Transitions at the Faculty of Social Science, both at Erasmus University Rotterdam), who was visiting Japan from the Netherlands, as our special guest. Masahiro Matsuura (Professor, Graduate School of Governance, Meiji University) cooperated as an interpreter and coordinator. 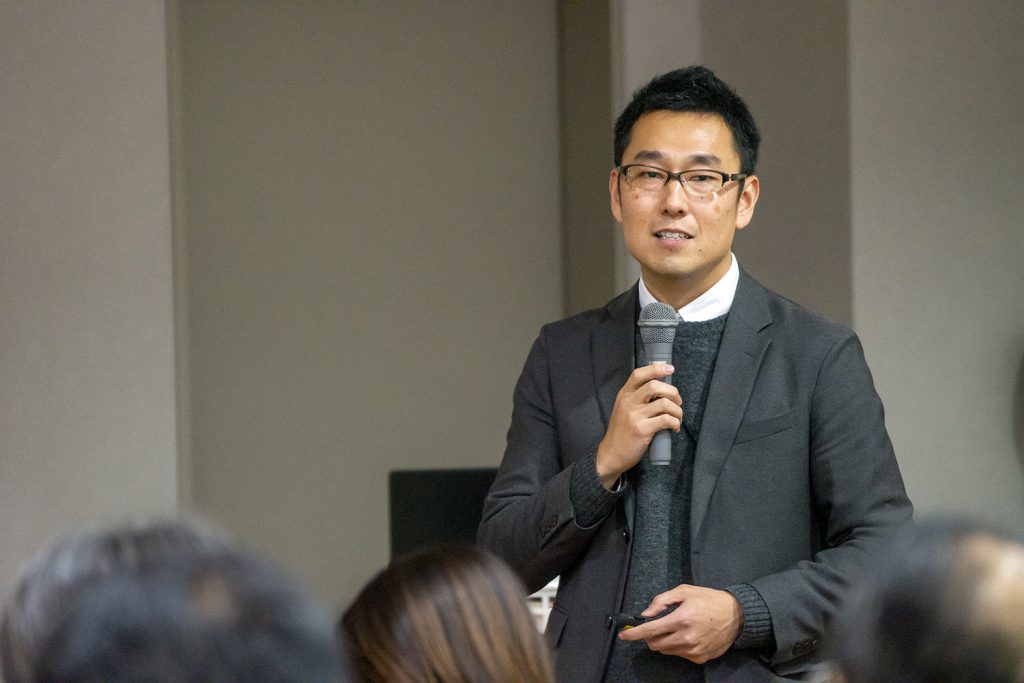 A new “machinori” will start soon

“Machinori”, the bicycle rental system created by Masahiro Katagishi, has been in operation for eight years as of January this year, with a total of 1,239,000 uses and  425,000 users. Currently, the system is being updated and the number of cycles and cycle ports will be tripled on March 1st. “I’m working hard to make it a true public transport system,” says Kagishi.

“As the global trend is transitioning from car to person and from space to place (space becomes place by adding human activities), this trend is closely related to SDGs. Before thinking about transportation, sharing the vision of how we should develop the town/city itself is important,” Mr. Katagishi said. He also introduced a service called “MaaS (Mobility as a Service),” which allows users to search, make reservations, and settle payments in an integrated manner by combining them optimally, which is getting more and more attention these days.

Three years ago, Mr. Katagishi traveled to Barcelona, Spain, where he interviewed various local transportation operators and asked, “Why is mobility necessary?”. The answer was simple but impactful for him: ”For the happiness of people. Our mission is to support people’s activities and produce a happy urban life. We will provide mobility services for that purpose. Is it different in Japan?”.

Mobility is needed for people’s happiness

Thanks to that revelation, Mr. Kagishi learned three points that support happiness:

①Accessibility: Improve the accessibility of many kinds of activity by diverse groups of people

②Multimodality: Coordination of various transportation forms in consideration of accessibility (ease of use)

③Integration: Development and transportation policies that take into account various policies such as land use, welfare, environment, and tourism (integration of various city policies is needed)

“Happiness is the emotion that you gain from various activities → movement occurs to proceed with activities → supporting people’s activities and people to access happiness” = Mobility,  Mr. Kagishi said.

Then how about Kanazawa as a city and its transportation from the perspective of happiness?

Mr. Kawagoshi said that many great ideas have already been shared for transportation and community development for the future of Kanazawa City. However it is not progressing easily because stakeholders are not sharing a common vision like his idea of mobility-based happiness yet.

However, based on the environmental and social aspects of the five directions of the Kanazawa SDGs, Mr. Kawagishi hopes that there would be more opportunities where open discussions can be held in the future.

Imagine traffic in Kanazawa in 2030

”Technologies such as AI, autonomous driving, and MaaS apps are means, not goals,” Mr. Kawagishi said.

“First, enjoy yourself.” He says that it is important to think about “What are the attractions and activities of Kanazawa that you want to cherish? What is unique about Kanazawa?” Then, in order to realize happiness, consider the ideal way of mobility to support it, create a transition, and create a human-centered world in Kanazawa where citizens and tourists both can enjoy moving around. 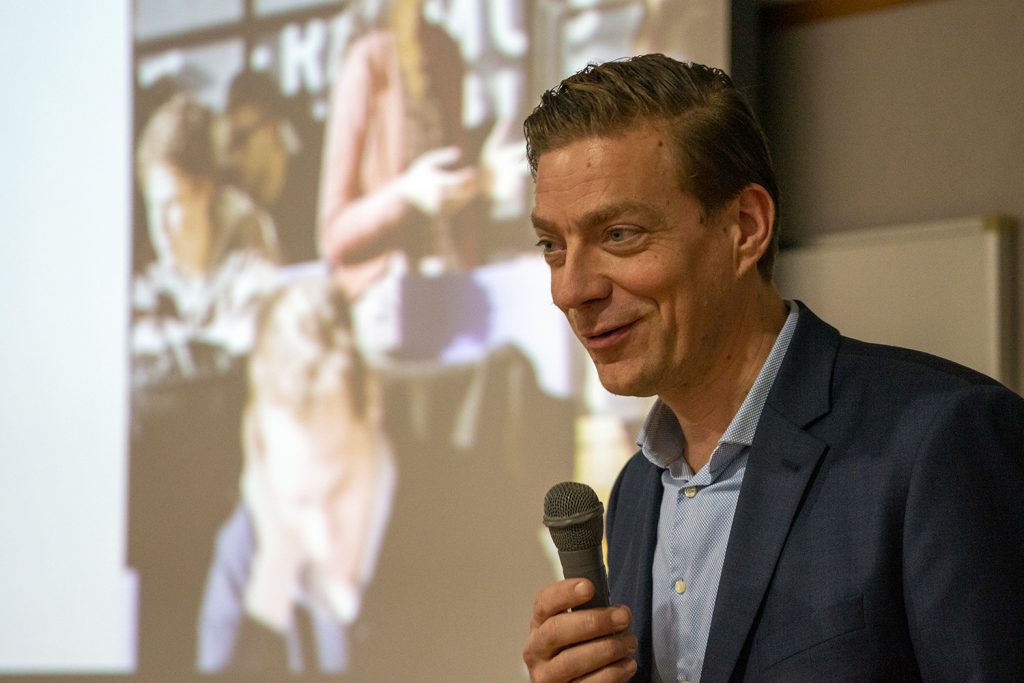 “How to make a transition?” by the pioneer of mobility transition

So how do we rebuild mobility for future happiness? Derk Loorbach, a professional of mobility involved not only in research but also in its real-life application, made a proposal to improve the sustainability of the city.

“For example, climate change and the loss of biodiversity are recognized worldwide, but there is no real action, and that’s the problem. People are aware of it and they even know the solution but there is still no action. How can we make a big change there? That’s what we focus on,” said Mr. Derk.

“When I talk about transition, some people take a negative stance and call me an idealist or a dreamer, saying it can’t be done, and it costs money. It isn’t easy to believe in the future, but increasing the number of people who believe in change and the future is a part of the transition process.” Mr. Derk said.

At first, it might just be a few bureaucrats in a government office or  employees in a large company, but the transition begins when those people successfully make friends and try various experiments and methods to begin a transition. As it grows, the shape becomes visible–in Kanazawa, for example, the number of bicycle lanes has increased considerably these past few years. In the same way,things that will be considered normalin the future but are still not common right now will gradually develop to become the norm.

“There’s a project called “place of transition” where people who can make a change come together and think about what kind of transitions are possible. The aim of this idea is for the participants to get back to their workplace or community and create opportunities for movement as an organization,” Mr. Derk said.

Mr. Derk also introduced us to a number of actions taken in cities in Europe. For example, in Ghent, which is one of Kanazawa’s sister cities, there is an initiative called “Living Street”, a project to close the streets to traffic for two months during the summer and use them as parks. Apparently it took two years to persuade the relevant departments, and in the first year it was carried out in only 2 streets where cars hardly could pass. After a few years, more streets joined the project. In another example, this time in Rotterdam,  the government was undertaking a mobility transition project and they noticed that some people were being excluded. For example, poor people can’t commute, can’t move, or can’t ride a bike because they have no money. This was perceived as a social welfare issue, and free bicycles were offered.

It seems that the transition has changed the mindset of officials who did not like rapid changes until now, and they are now trying more and more experiments. Until now, the idea was “to solve problems when they occur”, but it is said that the idea has been shifted to “creating problems on purpose and providing solutions.”

There were a lot of deep questions at the question time.

Everyone seemed to be having a lot of problems and asked a lot of questions. Here are some of them. 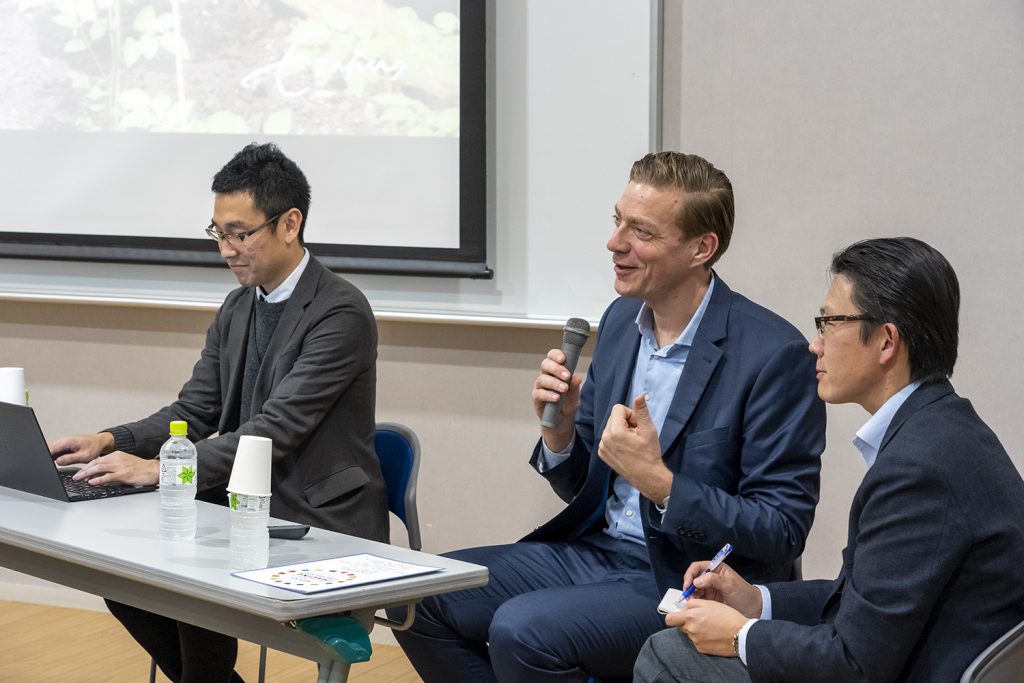 People in Kanazawa hardly think about public transport. What should we do to change the consciousness of these people?

Some people may be uninterested or find it annoying, so the point is to start small. It’s also important to start by connecting with people who are already active and making it visible.

In the Netherlands, it rains a lot, but I hear that lots of people ride bicycles. On the other hand, people in Kanazawa say that bicycles cannot be used because it rains and snows here. How has the Netherlands encouraged people to use their bikes in the rain?

In the Netherlands, where a bicycle infrastructure is available, riding a bicycle is easier than riding a car. In Kanazawa, it may be easier to drive. Whether it is raining or snowing, it’s important to try out a bike tour or an event together, make it visible, and make it seem normal.

How did the results of the transition experiment affect the economy?

When talking about a case where a parking spot on the street was turned into a park as an example, we asked the shop owners or residents in front of us, “Do you want to do it?”. At first they said no because customers could not come in if they closed the street, but when they actually tried it, they realized that creating an attractive space increases the number of customers. This project gradually spread, and in Rotterdam 4,000 parking spaces have now been converted to parks. We have also calculated that zero emissions will bring various social benefits, improve health, and reduce costs. As for which sector suffers the greatest damage, the fact is that the government has a lower tax revenue, and that’s the greatest impact.

In your experience, are there any examples where tourism has become more active as a result of a transition?

Like Barcelona and Rotterdam, a city that is easy to walk and comfortable to live in would have more benefits in tourism. The point is not to shut down the car immediately, but to give more options to people, for example allowing only electric cars and providing other transportation methods.

It would be amazing if Kanazawa becomes a city like Zermatt where only electric cars are allowed. I feel like it would be better to change people’s mindset in that kind of direction.

<Question from Katagishi-san to Mr. Derk>

How did you make everyone agree to one person’s idea as a policy? I would like to know if you have any tips.

Making a plan that says “everyone agreed” and expecting it be implemented someday is just a dream or an illusion. We should focus on people’s actions, how we can all positively keep working for a better future. If you have a strong opinion of  what the future should look like, you should talk and connect with individuals who are in tune with that belief, and in that case you don’t need all the stakeholders to agree with you.

More than 60 people gathered to participate in this event, likely because the theme of  “transportation” was familiar and relevant to their lives. Derk said, “I would start with the little things like this cafe first. This could be the start of something big, I believe it could”.

The official website of Kanazawa SDGs IMAGINE KANAZAWA 2030 has been launched. Check out the upcoming SDGs cafe schedule as well. Https://kanazawa-sdgs.jp