OUIK > Events > Collaborative research > Kanazawa > Event report – SDGs Café No. 3: What Education can be Expected Today? – Viewing of “Most Likely to Succeed” Film and Workshop 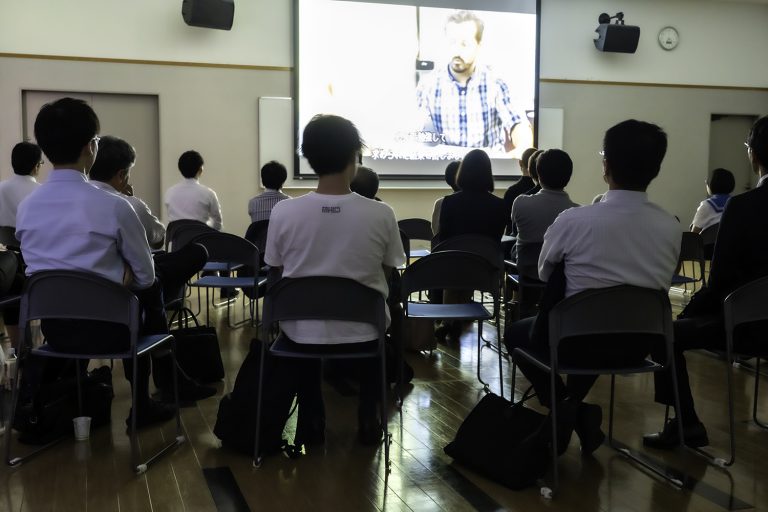 The event started off with an introduction by OUIK office manager Mikiko Naigai, explaining the purpose of the SDGs Café-Series, which started in April 2019. In this 3rd event, the documentary film “Most Likely to Succeed” was shown and then discussed among the participants. The focus of the event was education, and in this context the California-based ‘High Tech High-School”, which proposes an educational model which makes the traditional exam orientated education seem obsolete, was discussed.

These topics are particularly relevant in modern times, as existing educational models are based on a worldview of 120 years ago, when mass industrial production and fast economic growth were still a viable end-goal. Since the second half of the 90s, when rapid technological progress and fierce competition between corporations took place, the availability of jobs has continued to diminish, and traditional university graduation does not necessarily lead to stable jobs anymore. Within a rapidly changing world-economy, current schooling systems are quickly becoming obsolete, and Japan’s is no exception.

After watching the film, a general discussion was held between all participants where they shared their first impressions, their doubts about the current system, and new insights they encountered. Then, after a tea-break, the participants split into groups of 4-5 in order to take part in a workshop where 3 different key-aspects were investigated: 1) What needs to be preserved in Japan, 2) Where is the problem, 3) What needs to be tried or implemented. It also bears mentioning that the Californian model serves as an inspiration, but at the same time it cannot simply be applied to the Japanese educational system since Japan has its very own particularities, positive as well as negative. For example, many attendees considered it to be important to preserve Japanese social codes and customs of respect and politeness. On the other hand, some expressed concerns that children cannot express their uniqueness within too-rigid social structures.

Participants agreed on the importance of collective discussion rather than the mere criticism of the current system in order to make change in the future.