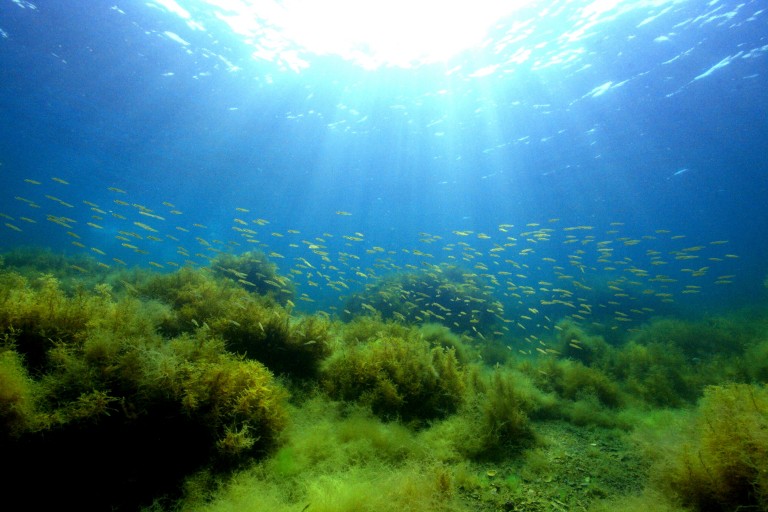 On 4 July 2015, the UNU-IAS Operating Unit Ishikawa/Kanazawa (OUIK) first lecture in its “Noto’s Satoumi Lecture Series” on Underwater Forest, a Cradle for Marine Life — the World of Seagrass and Seaweed in Nanao’s Satoumi in Nanao City, Ishikawa prefecture, Japan.

Attended by around 60 stakeholders from the fisheries industry, municipal government officials, local participants, the lecture was held with the objective of understanding the role and importance of the Noto Peninsula’s satoumi – or socio-ecological production seascapes formed and developed through human interaction with nature, through exploring the role of seagrass and seaweed in conserving coastal marine ecosystems and sustaining local livelihoods built on the use of these marine resources.

To kick off the lecture, a video presentation courtesy of Notojima Diving Resort was shown where Ms. Evonne Yiu (UNU-IAS OUIK) explained the importance of seagrass and seaweed beds as not only spawning grounds and habitats of living creatures but also aid in regulating and maintaining productive marine environments. Following the video, Ms Mikiko Nagai (Office Manager of UNU-IAS OUIK) noted that satoumi of “Noto’s Satoyama and Satoumi”, designated as a Globally Important Agricultural Heritage Systems (GIAHS) by the United Nations Food and Agriculture Organization, provides an array of traditional wisdom on sustainable use of marine resources and these locally based knowledge activities could make meaningful contributions to achieving of the new Sustainable Development Goals (SGDs).

In the first lecture delivered by Prof. Tetsuo Yanagi (Professor Emeritus, Kyushu University), a pioneer in advocating the satoumi concept, the multi-functionality of eelgrass beds was explained; they provide spawning and breeding grounds for young fishes, contribute to the entire food chain through micro-organisms residing on sea grass, make good hiding habitats for sea creatures etc. Prof. Yanagi also introduced a successful project in Hinase town in Okayama Prefecture that recreated an extensive area of eelgrass beds, and stressed the importance of continuity in maintaining the sea grass beds through mulit-stakeholder efforts.

Next, speaking from his research experience in Noto Peninsula over 20 years, Mr Takahiko Ikemori (Ishikawa Prefecture Fisheries Research Center) introduced that Noto Peninsula is home to Japan’s third largest seaweed beds with a total area of 150k㎡, and the country’s largest Sargassum fulvellum beds of about 120k㎡. To date about 200 over species are known to exist in Ishikawa Prefecture, out of which over 30 edible species are eaten in Noto region.

However, Mr Ikemori also observed a worrying trend of withering eelgrass beds over extended areas in recent years due to the rise in seawater temperatures in the summer.

In the following panel discussion moderated by Ms. Evonne Yiu, Mr Hiroshi Kuratani who has been making his living as a fisherman over 6 decades in Notojima Island in Nanao city, described how sea grass and seaweed harvests in Nanao bay used to make up half of his family income from his very young age. However, sea grass and seaweed of commercial value gradually disappeared over 20 years ago in the waters around Notojima island and along with it resulted in a reduction of total fish catch. Mr Kuratani’s experience solicited questions from the floor on the reasons behind this phenomenon and led to active discussions on the interconnected relationship between satoyama (socio-ecological production seascapes) and satoumi, that it is important to recognize human activities on land could bring impacts to the marine environment. Closing the lecture, Mr Terumoto Hama (Vice-Chairman, Nanao City Satoyama Satoumi Association) lauded the lecture as a good opportunity for multi-stakeholders to gather together to think about the interconnectedness of satoyama and satoumi.