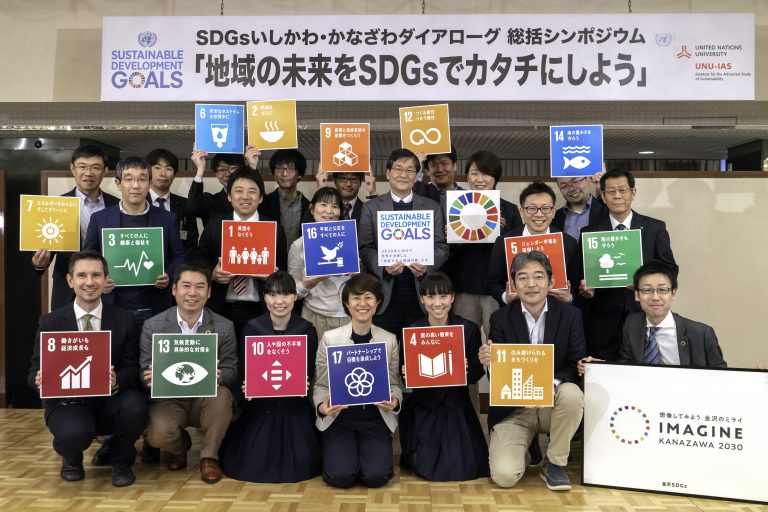 The SDGs Dialogue Series, which was started on June 4th, 2018, was concluded with this symposium. The event was entitled, “Contemplating the Region’s Possibilities of Implementing SDGs”. Participants discussed the many conclusions and insights that were gained throughout the dialogue series and made new suggestions for how to pursue realistically implementable SDGs in the future. The symposium was split into two successive sessions of panel discussions. The first session was concerned with the local government’s vantage point, while the following session was concerned with recommendations on partnerships between diverse fields.

At this event, the Mayor of Kanazawa, Yukiyoshi Yamano, presented the concluding agreement of joint research between the City of Kanazawa, the Junior Chamber International of Kanazawa (JCI) and the UNU IAS-OUIK on SDG promotion. Based on a 3-step plan of 1) Defining unique goals for the City of Kanazawa, 2) Developing an execution plan and 3) Spreading the goals to the Kanazawa citizens, 5 guidelines were agreed upon.

These joint efforts on building a sustainable city and society are being bound together under the official slogan ‘Imagine Kanazawa 2030’, which debuted in April 2019.

Local governments and their relationships with citizens play a key-role in promoting regional SDGs. Speakers stated that truly sustainable goals for 2030 can only be achieved if radical changes are made, since existing policies will soon no longer be sustainable. Many modern societal mechanisms that have been taken for granted until now, and urgently need to be reevaluated.

Representatives of the cities of Suzu and Hakusan, as well as Nagano Prefecture, gathered to recount their respective implementation strategies and relationships with the SDGs. For example, the city of Suzu, which was formerly at risk of being abandoned due to depopulation, has now been certified as a ‘future city’ through a local government initiative. In many cases, provincial cities are actually better equipped than their metropolitan counterparts to implement the SDGs’ philosophy and achieve equilibrium between the economy, the environment, and society, thanks to their reduced economic pressure.

Collaborations between diverse sectors are necessary to promote the SDGs in an integrated manner. In this discussion session on the importance of partnership, 3 former participants of the SDGs dialogue series were welcomed on the panel, including a representative of the ‘Code for Kanazawa Institute’, a representative of the EMPOWER project, and UNU IAS-OUIK office manager Mikiko Nagai. The SDGs are concerned with the ‘next version’ of our world. In this context, it is simply not possible to achieve real sustainable goals within isolated sectors. Moreover, the issue of sustainability cannot be reduced to one single problem. Neither individuals nor the administration alone can resolve these complex challenges—it demands a solid strategy based on a mutual partnership between the two.

Nagai (OUIK) mentioned that the most significant result of the SDGs dialogue series was the increased sense of connection between people, as well as mutual learning through the creation of new partnerships. She went on to state that SDGs are more about considering new lifestyles and ways of being rather than accumulating knowledge, and that such changes are mainly catalyzed through building partnerships. Eventually, we will realize that we have to collaborate and communicate with people from fields with which we have no previous connection. It is precisely in these kinds of circumstances that collective contemplation on sustainable society building can be done.