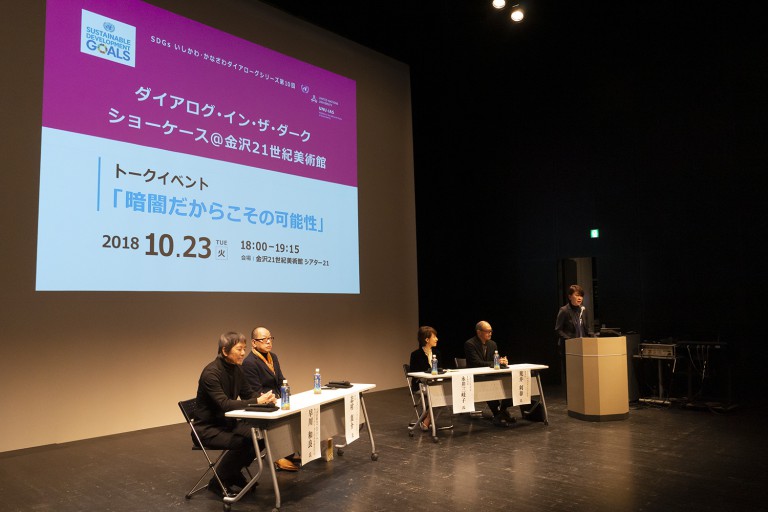 This talk event, held on the occasion of the first “Dialogue in the Dark (DID)” in the Hokuriku area, was hosted by the Universal Design Institute and co-hosted by the UNU IAS-OUIK, making it the 10th event of the SDGs Ishikawa-Kanazawa Dialogue Series. The purpose of the event was to reflect on the importance of diversity.

The “Dialogue in the Dark” Showcase (a concept originally conceived in 1988 by the German philosopher Andreas Heinecke) was held in the 21st Century Museum of Contemporary Art, Kanazawa, from October 18th to the 28th. Visitors were led into an entirely dark room where they were guided by blind people, the idea being that by cutting off visual perception, other stimuli become much more intense. Additionally, being exposed to an unfamiliar power dynamic—being unable to see and thus being forced to rely on others—encourages participants to re-evaluate their emotional connections with other human beings in a completely new way, and to gain further respect for diversity and the differently abled.

The focus of the event was on diversity and how to achieve harmonious co-existence within a society. Amongst the guest speakers was Mikiko Nagai, the office manager of the UNU IAS-OUIK. During the discussion, one remark in particular stood out: “In the dark, you need to insist upon your existence, otherwise nobody will notice you”. Towards the end of the event, participants took part in an experiment called ”turning on the lights”. Participants were asked to close their eyes and hold hands with their seat neighbors. Following the experiment, the atmosphere in the hall became much more relaxed and friendly. The purpose of the experiment was to give participants a glimpse of a society where human connection can shine brightly despite the darkness.

SDG and DID (Dialogue in the Dark)

The DID event is closely related to a philosophy of “leaving nobody behind”, as well as with SDG #10, “Reduce inequality within and among countries”.