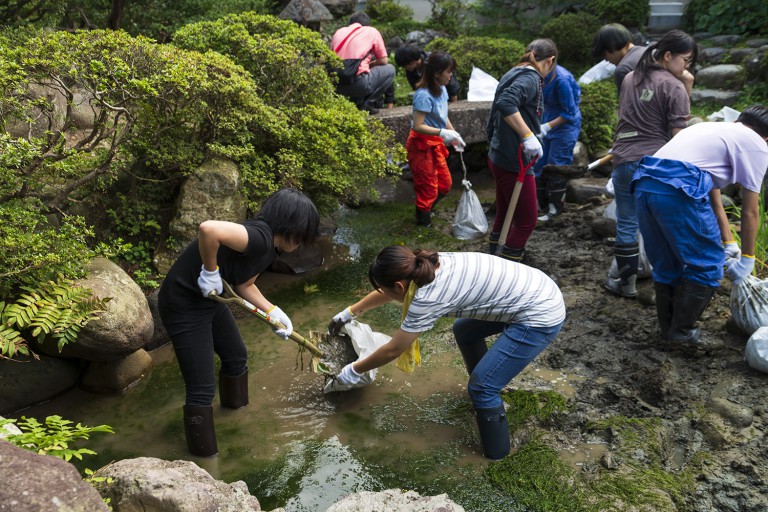 On October 9th, a garden-cleaning workshop was held at the Senda family garden of the Nagamachi district in Kanazawa, which is linked to the city’s canal-irrigation system, as the 9th SDGs Dialogue series event.

The mud that gradually accumulates from the canals needs to be removed from the garden on a regular basis. However, in recent years the garden owners have been unable to perform this physically demanding work on their own.

Students of the Kanazawa College of the Arts, officials from the Kanazawa City Hall, and UNU IAS-OUIK research associate Juan Pastor Ivars participated in this workshop. This workshop was also part of Pastor Ivars’s ambitious project of restoring kinship between citizens and nature through Japanese Gardens. He wonders if it is possible to covert various temple gardens, whose maintenance has been neglected over time, to so-called  “sustainable commons”.

Performing sufficient maintenance work in order to pass these valuable cultural heritage sites on to the next generation is a challenge that must be taken on not only by the owners of the gardens, but also by the city itself.

The canal water must be dammed during the garden’s cleaning process. Due to the fact that the rice fields also need constant irrigation from the canals, garden cleaning can only be done between autumn and winter.

While cleaning, the students learned first-hand that these gardens perform a number of ecological functions and are habitats to a vast array of life forms. The garden-cleaning workshop was followed by a tea ceremony where discussions about ecology and biodiversity were held. This kind of event could be considered a new model for eco-tourism.

In terms of SDGs, sustaining the local Japanese gardens is linked to goals 11 (Sustainable Cities and Communities), 13 (Climate Action), 15 (Life on Land) and 17 (Partnerships for the Goals).