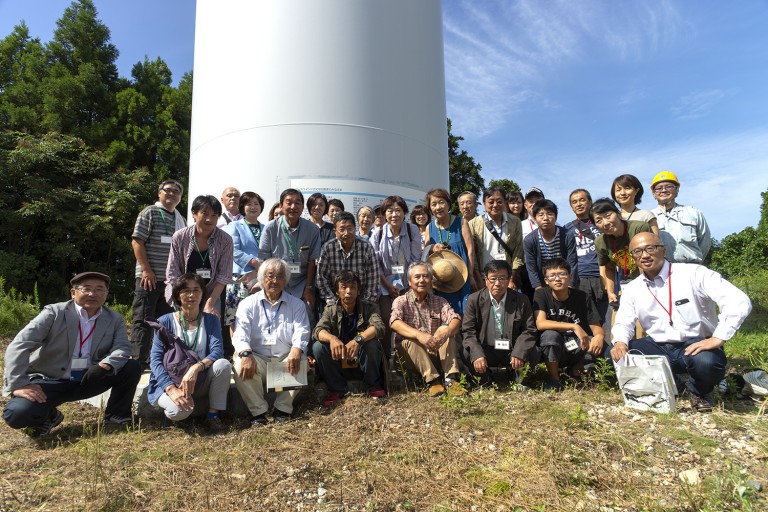 In this dialogue series, in order to learn more about the 7th and 13th SDGs (‘Affordable and Clean Energy’ and ‘Climate Action’), a bus tour was organized to visit a civic wind power plant, a civic solar power plant, and a hot bath facility heated by wooden biomass. In Japan, public awareness of the importance of clean and safe energy has particularly been high since the 2011 Great East Japan Earthquake.

The tour was organized by the LLC Kanazawa Civic Power Plant, the NPO “Civic Environmental Project”, as well as co-organized by the UNU IAS-OUIK. Seats were quickly sold out despite there being a participation fee.

This facility changed the fuel for its heating system from fossil fuel to wooden biomass, significantly reducing its greenhouse-gas emissions. Furthermore, it uses bamboo chips derived from abandoned bamboo forests and invasive bamboo from the forests surrounding Kanazawa, thus also contributing to the resolution of other environmental problems.

In 2016, due to demand from the residents of an emerging residential area, a solar power plant was built using modern high-efficiency solar panels. The wooden supporting structure was designed in order to match the surrounding environment and is said to be highly popular among the locals. Another unique aspect of the solar plant is that dividends to investors can be paid either in cash or in local agricultural products.

This power plant was financed for the most part by contributions from local residents. Its power-generating capacity of nearly 2MW can supply approximately 1000 households with electricity.