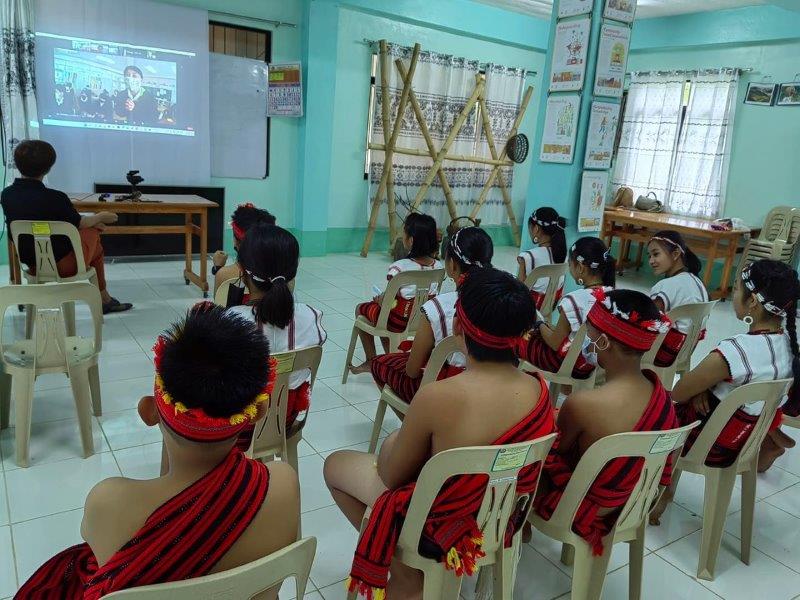 The United Nations University UNU-IAS OUIK, Noto SDGs Lab., and Ifugao State University GIAHS Center are collaborating to promote exchanges between children in the Noto and Ifugao, both are designated as the Globally Important Agricultural Heritage Systems (GIAHS) by the Food and Agriculture Organization (FAO) of the United Nations. The third elementary school exchange in FY 2021 was held online in February 2022. This exchange focused on the introduction of local dances and drums.

First, a video of students from Shoin Elementary School playing traditional festival music using instruments such as drums and flutes was shown, followed by an introduction of the costumes worn at the festival and a demonstration of the flute. They explained that the sound of the drums represents rain and the music is played to pray for rain. They also showed that there is a bell on the hem of the costume and explained that on the day of the festival, the sound of the bell can be heard throughout the town.

お祭りの横笛を紹介している様子 A student performing the flute

Students from Nayon Elementary School introduced traditional dance and costumes from their community.

一緒にイフガオの踊りを踊っている様子 Students from both schools dancing a traditional dance of Ifugao

珠洲市正院地区に伝わる「奴振り」を一緒に踊っている様子 Students dancing “Yakkofuri” that has been handed down in the Shoin area, Suzu City

During the question time, various questions were asked, and opinions were exchanged. For example, students asked questions such as why they wear masks when they play the drums and who designed the traditional costumes. Finally, a popular contemporary dance in the Philippines was also introduced, and all participants danced together.

At the end of the event, the principals of both schools commented on the program. Mr Yamagishi, the principal of Shoin Elementary School said that “Although there are differences in the dances and music of the two regions, it was very good to see that there are also similarities in the appreciation of the harvest in both regions.” Ms Aliguyon, the principal of Nayon Elementary School expressed her gratitude for the opportunity to carry out such a learning and fun student exchange. What was impressive about this exchange was that the elementary school students themselves played the traditional instruments and danced their local dance and were able to introduce them in their own words. This exchange was only possible because the local culture remains strong and has been passed on to the children in both regions, Noto GIAHS and Ifugao GIAHS. We believe that by introducing your own culture to the children of the same age in another country, they were able to further deepen their understanding of their region. Above all, it was a pleasure to see the children enjoying themselves as they danced together.

This marks the end of this school year’s exchanges, but we hope to continue supporting exchanges between the children in Noto and Ifugao in the future.