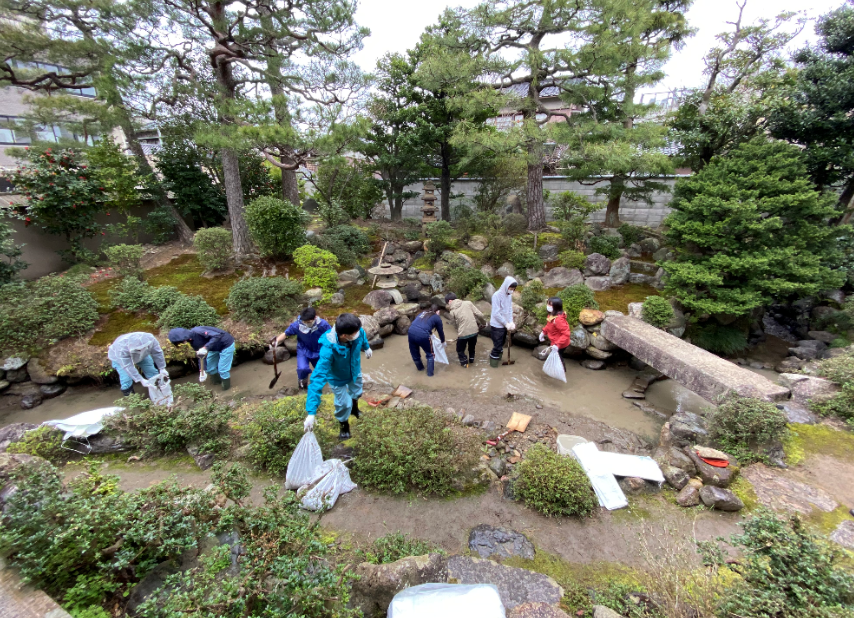 On Sunday, 28th of March, a Garden Maintenance SDG Tour was carried out at the Senda Family Garden (closed to the public), which has been designated as a place of scenic beauty by Kanazawa City. Our research associate Juan Pastor Ivars has held garden maintenance workshops for residents to experience the nature and culture of Kanazawa. This tour was planned as a model tour for involving tourists in garden maintenance, as part of the fiscal 2020 Kanazawa City SDG Tourism Promotion Project.

Volunteer maintenance of Japanese-style gardens has been carried out by city officials, researchers and students, including people from the Landscape Policy Department of Kanazawa City and Kanazawa College of Art. Since first participating in the project in 2017, Juan has created a hands-on program consisting of garden maintenance, workshops on the history and maintenance of gardens, and tea ceremonies, and has worked to establish and increase public awareness of the program.

Urban green areas such as Japanese-style gardens are an effective means of combating global warming and the heat island phenomenon, and play an important role in the preservation of native urban ecosystems and biodiversity. In Kanazawa, gardens have contributed to the preservation of cultural activities such as handicraft production and the tea ceremony, as well as cultural landscapes. Spending time in nature is said to be beneficial for people’s mental and physical health. However, due to demographic changes, problems such as a shortage of maintenance workers are making it difficult to preserve the nature and cultural landscapes of the city, as well as the associated cultural activities, and hand them down to future generations.

In order to solve these problems, Juan searched for ways of raising people’s awareness of garden maintenance as “ecotourism”. This workshop was planned through collaboration with You-I Japan, which excels in international exchange activities. It served as a model tour for preserving the green areas and culture of the city through cooperation between tourists and residents. This SDG tour followed Utastuyama Temple District and Eikyu-ji Temple Tour.

Although it was drizzling on the day of the tour, eight people, including Japanese students of Kanazawa Institute of Technology and Russian students of Kanazawa University, assembled in front of the Senda Family Garden at 9:00 am. First of all, Mr. Tsuba from Kanazawa College of Art, who is involved in garden restoration, explained the garden’s design. The central location of the pond allows it to be viewed from the path, and the pond’s water flows out of and back into the nearby Onosho Canal. The trees and stones are arranged to resemble cranes and turtles, symbols of longevity, when seen beyond the pond from the guest room. The participants learned about the sophisticated artistry of Japanese-style gardens. Next, they worked in pairs to remove dirt that had accumulated at the bottom of the pond. They were so concentrated that the work was done in silence. The amount of accumulated dirt in different areas depended on the flow of the water.

After cleaning the bottom of the pond, the participants took a short break, and then the garden’s owner, Mr. Senda, explained the history of the garden. The Senda Family Garden was constructed by Senda Tobumi, who had great success in the Seinan War, which took place in the middle of the Meiji period. Mr. Senda showed photos of the gradual changes in the garden’s design that were made over time. The design of the area around the earthen-floor porch, where azalea trees are planted now, was different before. Also, there used to be a waterwheel beside the waterfall in the stone arrangement. Mr. Senda is considering opening the garden to the public, as it combines the scenic beauty created by a garden ecosystem with historical and cultural value, and creating an exhibition on the history of Senda Tobumi.

Before starting the tour, the participants surveyed the species of living things in the garden. Many species, including shrimp, dragonfly larvae, dark sleeper and sweetfish were found in the pond. It was a valuable opportunity to learn about the garden’s nature and culture.

Lastly, the participants had discussions. It seems that these days, tourists prefer to have unique experiences by exploring areas thoroughly and learning about their unique characteristics. The garden workshop has the potential to become part of a tour; however, it would be necessary to explain differences in gardening techniques, as well as local history and culture, to people from countries with different cultural backgrounds. One of the foreign participants commented on the excellence of Japanese landscape-gardening techniques.

We will continue to consider model tours that can contribute to the management of the greenery and culture of the city through collaboration between residents and tourists, and hand down the values of nature and culture to future generations.