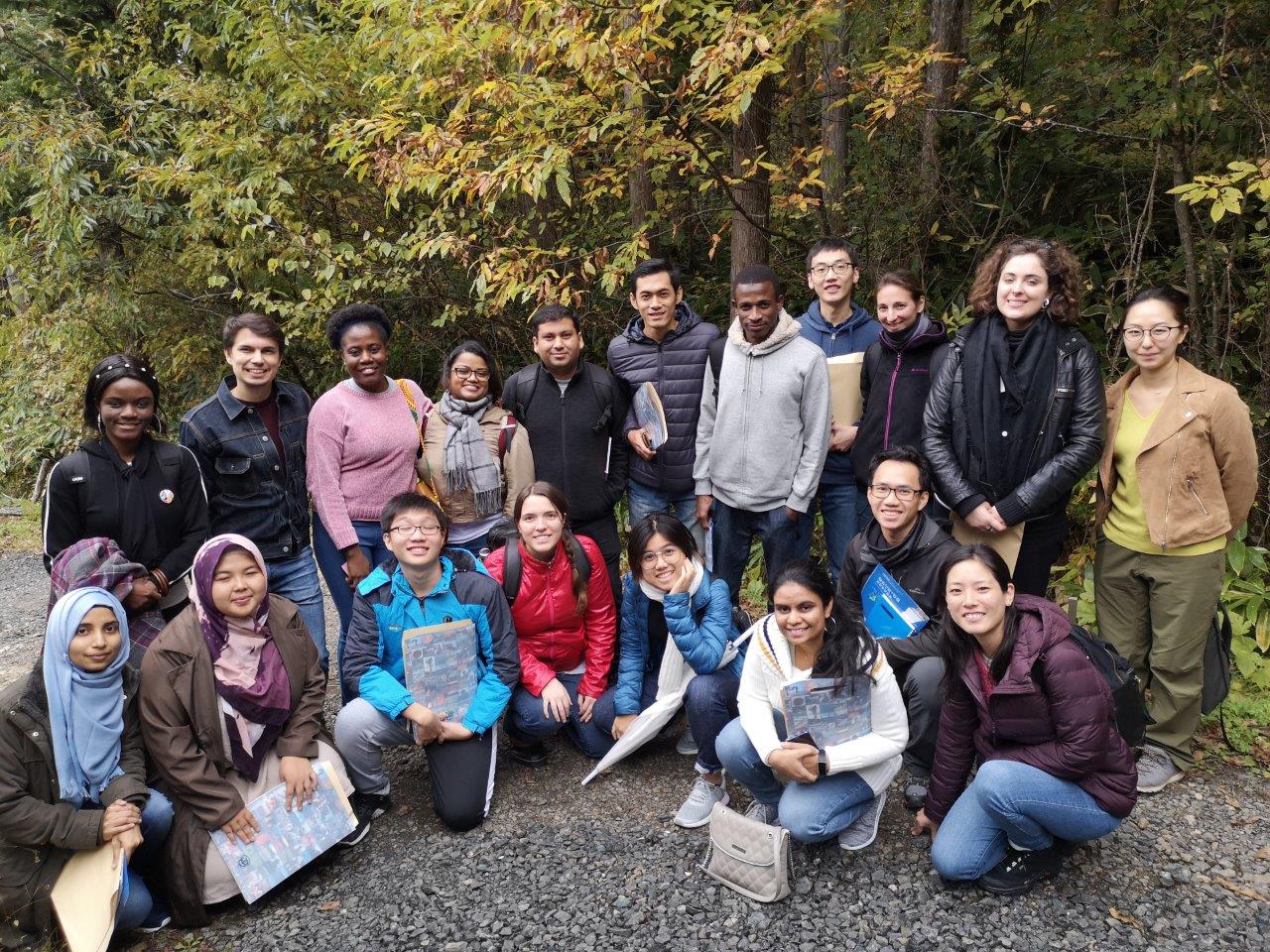 This is a report on the 2nd GIAHS Academic Programme, a 3 day academic trip to the Noto Peninsula in Ishikawa Prefecture, held from November 9th to 11th, 2019.  The purpose of the trip was to allow participants to experience the Satoyama and Satoumi agricultural areas first-hand through activities focused on the sustainable use of local resources.

Sustainable land-use in these regions is being affected by social issues such as depopulation, an aging population, and low birth rates, trends which continue to endanger future development of the region. Even so, the Noto GIAHS region has the potential for  sustainable community building, although it will require a sensitive strategy of revitalization. These topics and more were covered in group discussions held on the last day of the trip, where several stakeholders from the Noto region shared their views.

The trip was co-organized by UNU-IAS OUIK and the Satoyama Promotion Department of the Ishikawa Prefectural Government, and co-funded by Ishikawa Prefecture and the United Nations University. 17 international students from 13 countries –South and North America, Europe, Asia and Africa–came together to participate. Among them were 6 students from various Japanese Universities, 11 of whom came from the United Nations University, accompanied by their professor, Dr. Saito.

On the morning of the 9th, participants met at Kanazawa Station to board a chartered coach, which then headed North into the Noto Peninsula following the coastline. After picking up students from UNU-IAS at Noto Airpor, their first destination was the village of Mii in Wajima City, where a local association called Maruyama Group has been working to maintain the Satoyama ecosystem and promote awareness through educational workshops. 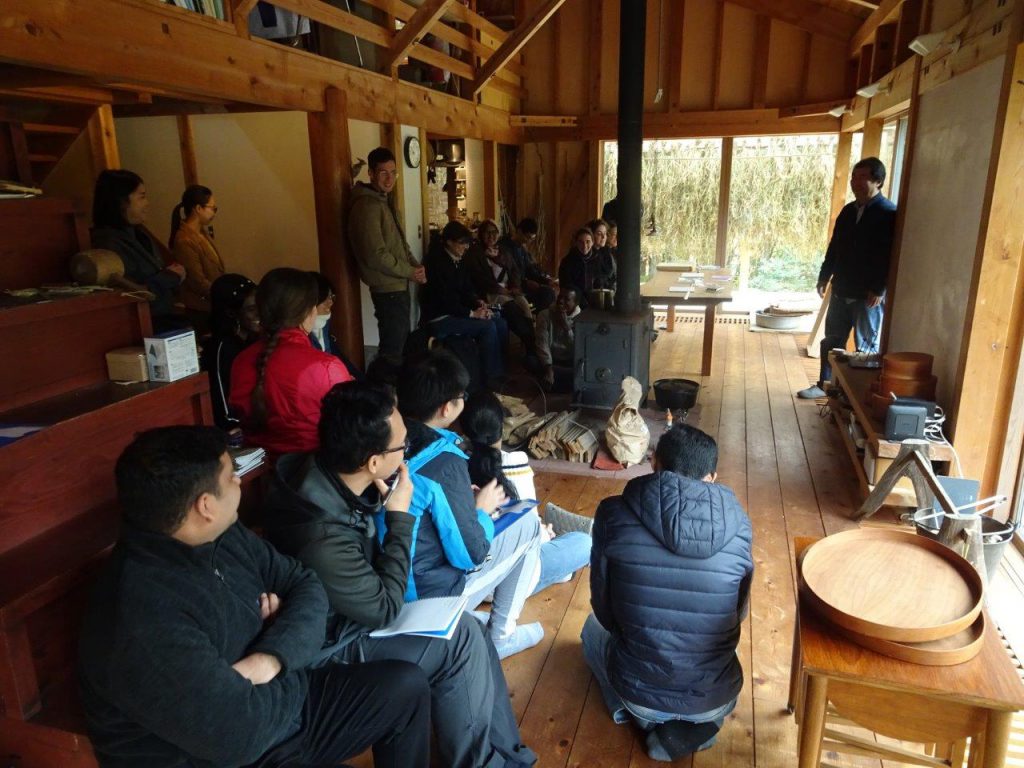 The group was welcomed by Mr. Hagino, a professor, architect, and volunteer worker deeply engaged in sustainable community and lifestyle building. Hagino was accompanied by his colleague Mr. Hosokawa, who is, among other things, a Shinto priest who performs the local agricultural ritual “Aenokoto”, in which the deity of the rice field is invited into the house to be venerated in a ritualized manner.

Mr. Hagino explained how he relocated from Tokyo to Noto, after having spent several years in the United States. His reasons were ideological in nature, as he had grown critical of industrialized consumerist society, and decided to develop a lifestyle which seamlessly fits within the cycles of nature. Team Maruyama is a project which hosts a variety of activities based on mutual learning (e.g. plant observation or cooking workshops) in and around Mister Hagino’s house and the surrounding Satoyama area. He also addressed the difficulties that accompany his activities, such as the harsh weather conditions, the aforementioned social issues, and his struggles to be accepted among the locals, many of whom continue to perceive him as a stranger. 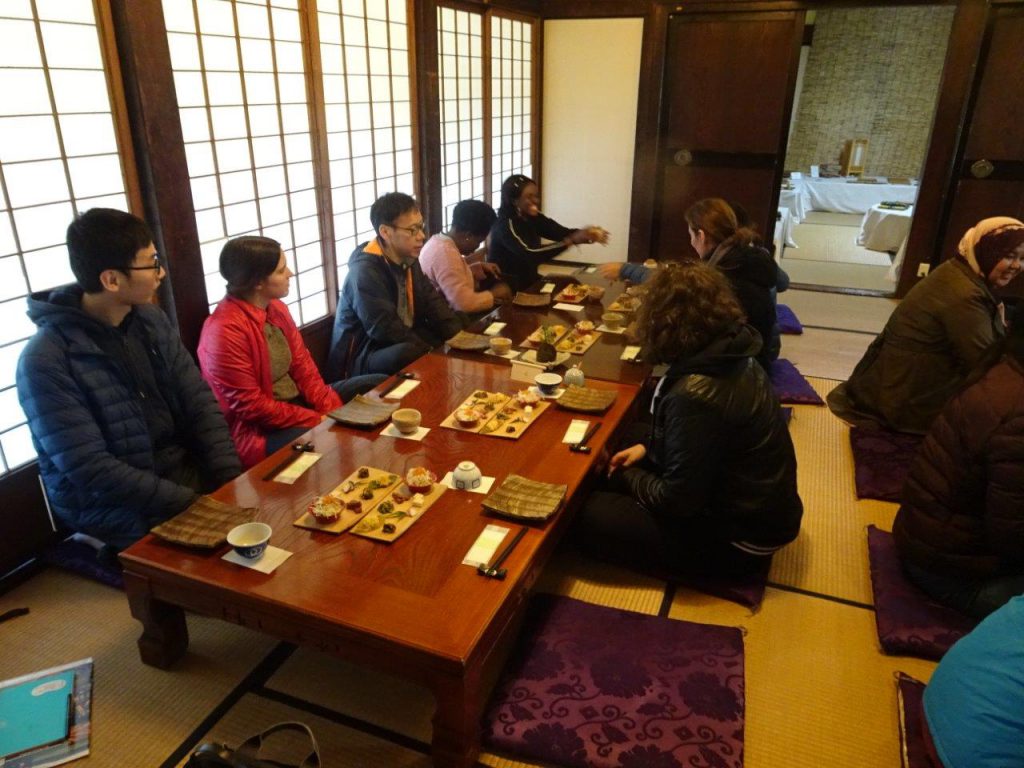 The group then moved to a nearby restaurant operating out of a restored thatched-roof farmhouse, where they enjoyed a lunch made entirely from local goods. The young owner introduced each of the delicately-prepared dishes, which were made using a variety of edible wild plants. The owner operates a variety of small businesses centered around slow-tourism in the region, such as bicycle tours and overnight stays in traditional farm-houses. Much like Mr. Hagino, he also moved from a bigger city to the Noto Peninsula a few years ago in order to pursue a more natural lifestyle. 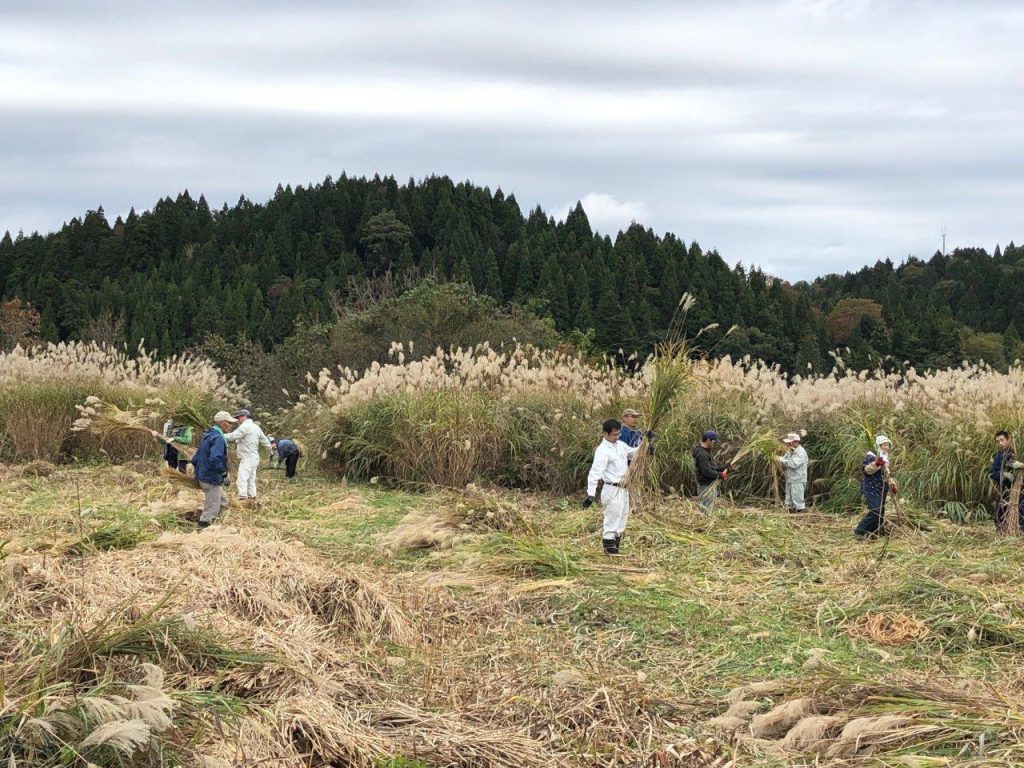 After lunch, they visited a silvergrass field nearby the restaurant, where volunteer workers were harvesting the grass to be used to repair the thatched roofs of nearby houses. Ishikawa Prefecture developed this volunteer matching system where people who need help in farming/ agriculture and people who are willing to contribute can match up. Some volunteers suggested that this kind of volunteering could advance regional revitalization by giving city people the opportunity to come out to the countryside on their days off in order to contribute in collective projects, while also being exposed to a healthy natural environment. “We are very grateful to have volunteers coming to help us. All the houses in this area had thatched roofs back in the day but there are only 2 now. We want to protect these 2 for the future generation.” said the local farmer Mr. Nishityama. 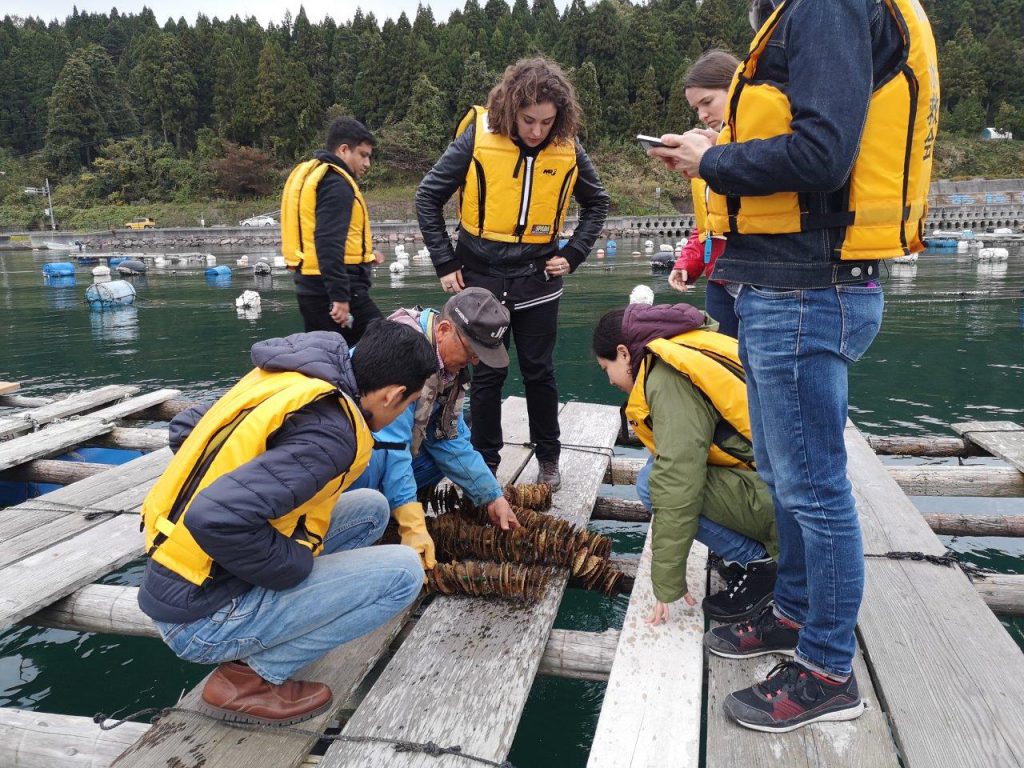 The group then set off South to visit an oyster farm in a small coastal village near the city of Anamizu, where locals explained how to harvest and prepare oysters for market. They learned that oyster farming is highly depending on the weather, and this year was a particularly hot year with little rain. They also interviewed Mr. Saito who moved to Anamizu a few years ago to become a fisherman. Now, not only he does oyster farming, but he also runs a restaurant where people can eat fresh oysters. He said “To have a stable income as a fisherman, it is important to have more than one income sources. I am very busy but also very happy to work as a fisherman which had been my dream since I was young”. 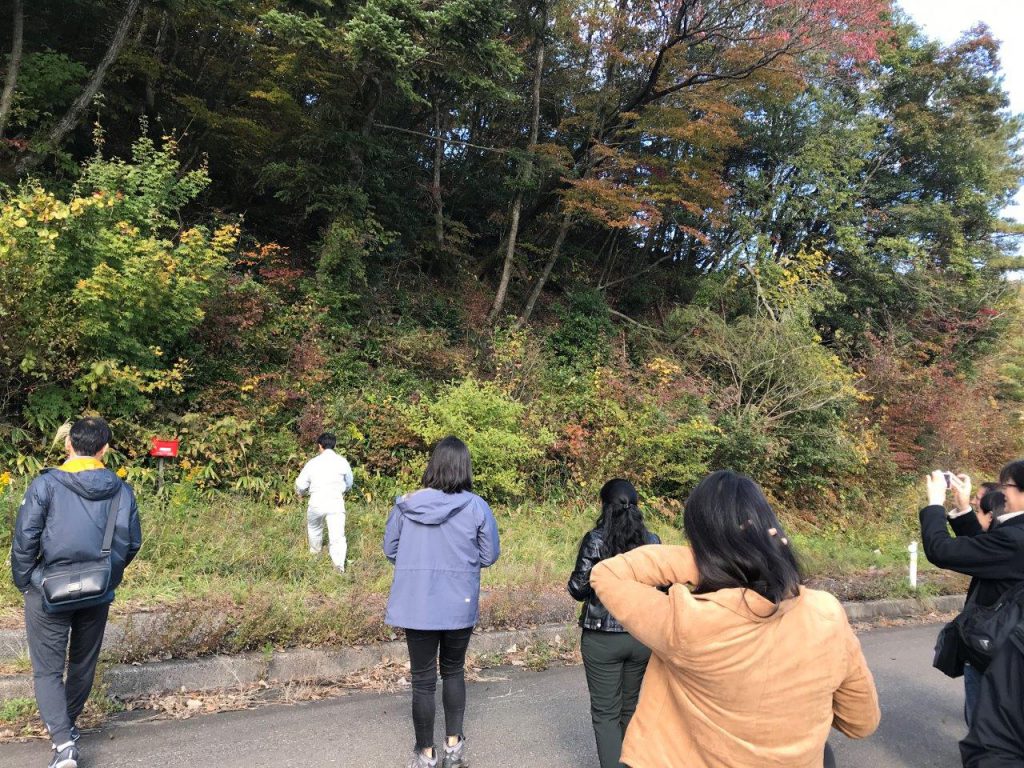 In the morning of the second day, a representative of a local currency system came to talk about his association. The system encourages repurposing leftover timber material from local forests. Once a person registers, they can bring timber material to the “timber station” in exchange for a proprietary local currency which can then be used in registered shops and restaurants. The system is subsidized by the forest and environmental tax, and it serves as an incentive for the revitalization of local economic activity, as well as for better usage of local resources.

A tour bus then took the group to the next destination Shunran no sato in Noto town, an area where currently more than 40 farm inns are located. There the group met their guide for the next 3 hours—an energetic 71 year-old man Mr. Tada who established Shunran no sato to revitalise the area in 1997. 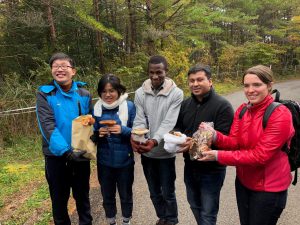 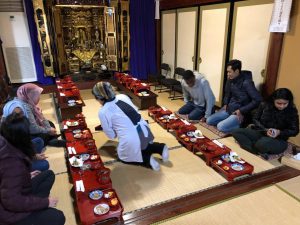 Mr. Tada led them to the nearby Satoyama forest he owned, where they gathered mushrooms to be eaten at lunchtime.  They were invited to Mr. Tada’s house to taste local delicacies straight from the mountain, including vegetables, mushrooms, and river fish, as well as locally-brewed sake.   Despite his vivacity and his apparent optimism, he also expressed concern about the low birthrates, depopulation, and other challenges involved in making the region flourish once again. 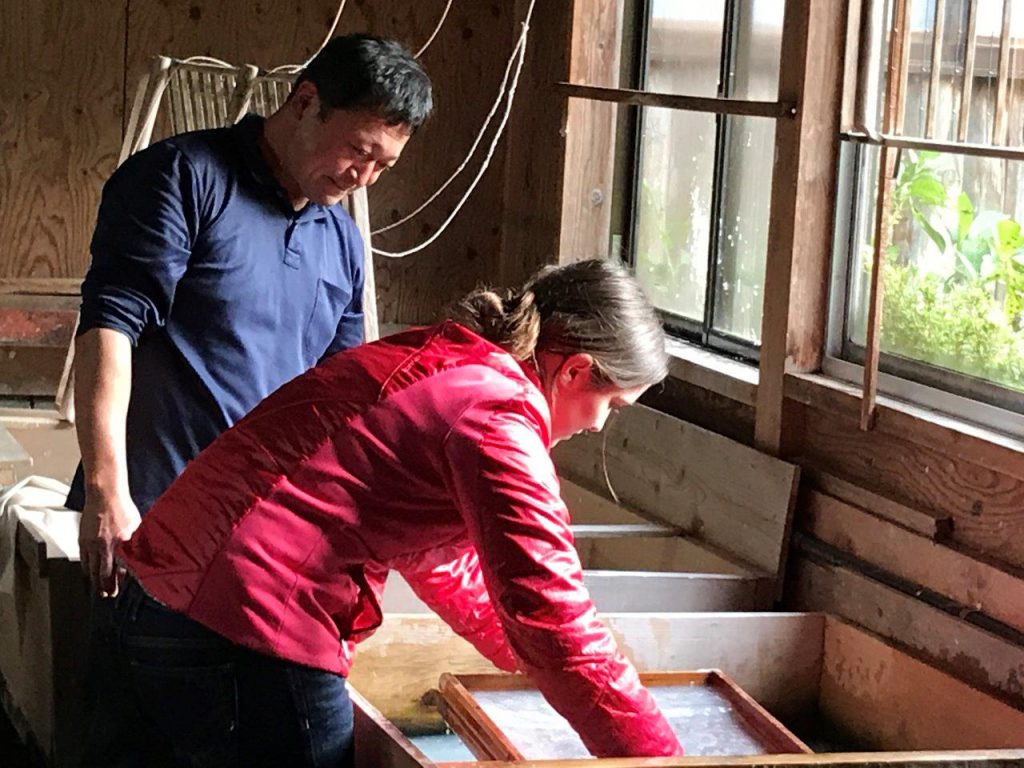 The day’s last stop was at a traditional “washi” (Japanese traditional paper) factory, run by Mr. Toumi and his mother. The plants needed for their paper came directly from their garden  and the forents in surrounding area.  The students tried their hand at making their own washi by evenly spreading cold water containing cooked pieces of bark in a wooden frame, a task which proved more difficult than it seemed. According to Mr. Toumi, they are offering a greater variety of Washi papers these days then before since the use of Washi as wallpapers, business cards or even Sake rabel is increasing. 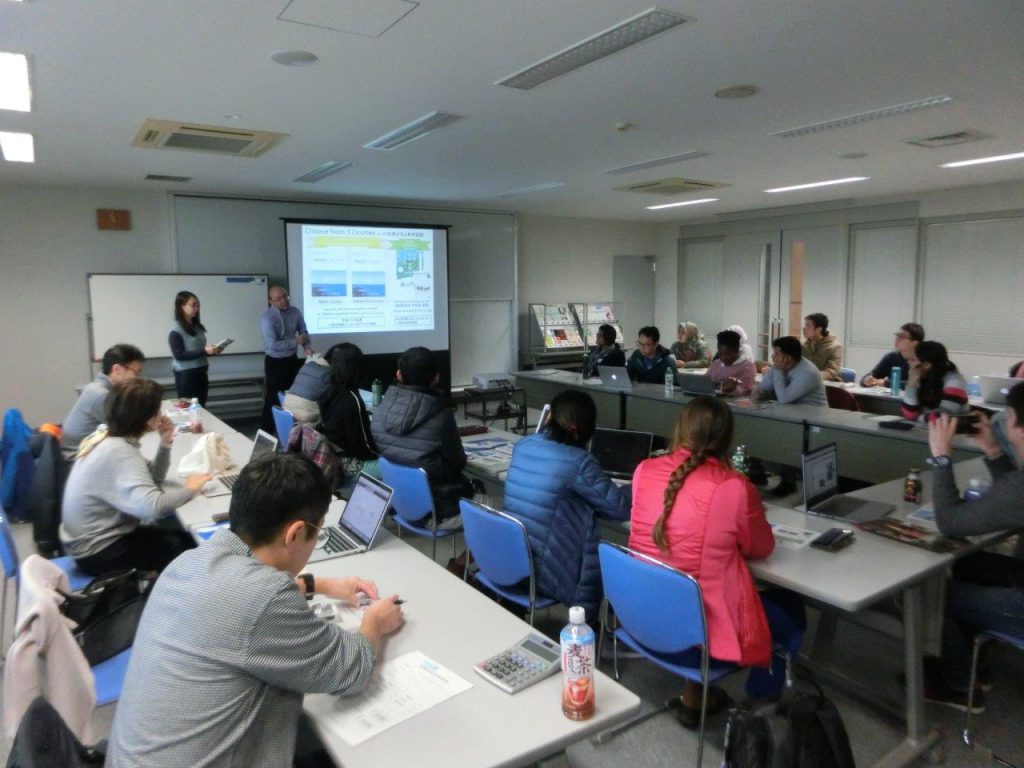 The final day of the tour was dedicated to summing up the previous two days in group discussions. After a stroll in the local market of Wajima City in the morning, the group headed back to the Noto Satoyama Airport for a conference with several stakeholders of the Noto region.

Before lunchtime, Professor Ito of Kanazawa University gave an introductory presentation about an educational program called the “Noto Meister Program”, a complementary course with the goal of deepening students’ understanding of local ecosystems and promoting a knowledge-based strategy to revitalize the Satoyama-Satoumi areas of Noto.

In the afternoon, the students of the United Nations University split into 3 groups and gave presentations on their insights on the Noto Satoyama region gained over the past few days, as well as their proposed revitalization strategies to respond to the social and economic issues of the region. The local stakeholders were also invited to comment on the students’ viewpoints.

After several hours of stimulating exchanges, the meeting ended right on time for the UNU-group to board their flight. Following a collective farewell, the remaining group headed back to Kanazawa Station via tour bus. 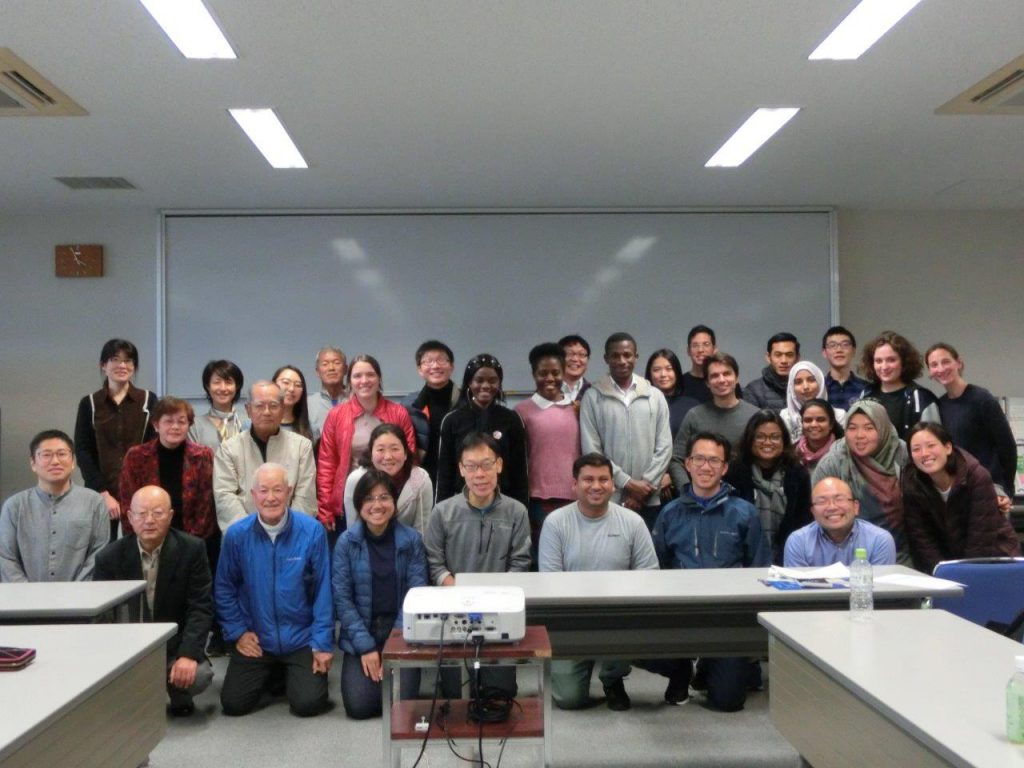