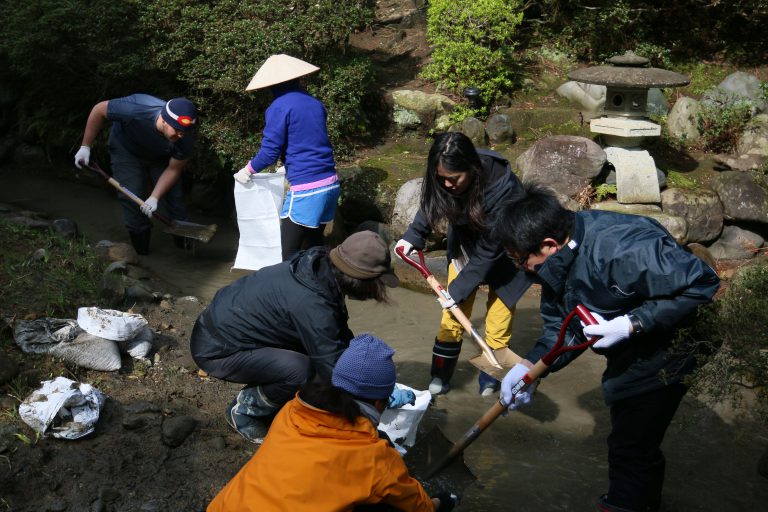 Maintaining a garden is laborious work. In particular, gardens such as Senda Family’s Garden, which has a large pond that draws water from canals, require regular pond cleaning in addition to the usual weeding and caring of trees. This entails difficult and heavy manual labor. Half a year had passed since the last cleaning workshop, and mud had accumulated once more at the bottom of the pond.
Around 15 people, including local residents, students, local government officials and tourists from other countries, participated in the workshop. They went inside the drained pond and shoveled out the buildup of mud at the bottom.
After cleaning, they had tea in the house and learned about the history and construction of the garden from the owners, Noriko Senda and Nobuhiro Ishino. The garden is a type of Japanese garden with a central pond and strolling paths around it, and was made in 1894 by former Kaga Domain retainer, Norifumi Senda. They said that the level of techniques of gardeners used throughout the garden would be hard to find these days. All the participants were absorbed in listening to the extraordinary talk.
This kind of volunteer cleanup work was originally carried out mainly by the Landscape Policy Division staff of Kanazawa City. Juan Pastor-Evars, an OUIK researcher, joined from 2017 and promoted a practical immersion program that includes Japanese traditional tea ceremonies and workshops for learning about the garden history and management after the cleanup, with the aim of developing the work into an ecotourism activity. This can potentially be used more extensively as a new garden management system as well, that benefits owners by redistributing the heavy labor.