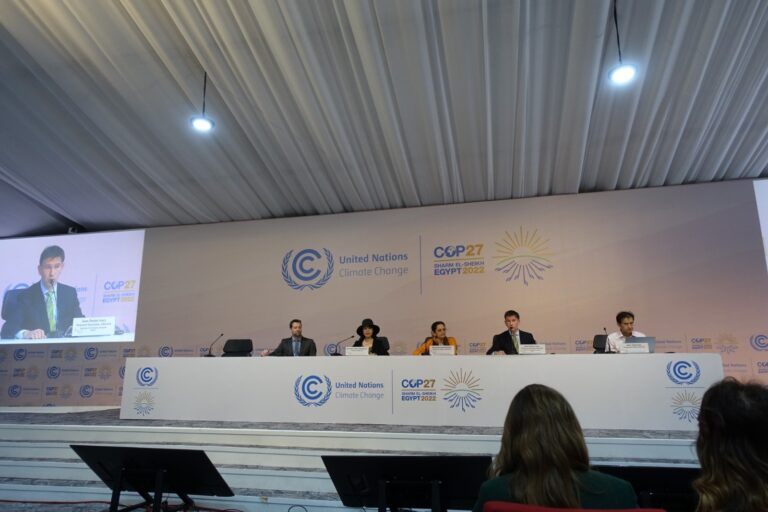 From November 6th to 18th, the city of Sharm El Sheikh (Egypt), held COP 27 on climate change. It was organized by the Secretariat for the United Nations Framework Convention on Climate Change (UNFCCC) and attended by over ninety heads of state and 35,000 representatives, stakeholders, and observers, from around the world, including an eight-member delegation from UNU-IAS led by its director Shinobu Yamaguchi and including OUIK researcher Dr. Juan Pastor Ivars.

The objective of the COPs, held yearly since Berlin 1975, is to evaluate and make decisive decisions to deal with climate change. For example, at COP 3, the Kyoto protocol established the obligation for developed countries to reduce greenhouse gas emissions; COP21, Paris, 2015, unanimously adopted the Paris Agreement to keep global warming below 2ºC, etc.

Sharm El Sheikh’s COP 27 had, among other challenges, climate finance to limit warming to below 1.5C, through which developed countries will focus on ways to help developing nations phase out fossil fuels and transition to renewable energy. Spatially, it was arranged in different areas and buildings where the parties gather for decision-making and the observers, organized multiple events and conferences held in the pavilions of countries, institutions, the private sector etc. The COP celebrated global, racial, and intergenerational diversity, where the voices of authorities, experts, indigenous people, etc., and that of the youngest are mixed with them, demanding a joint and determined climate action to be implemented without delay.

The objectives of the UNU-IAS delegation at COP 27 were the following:

-Raise the visibility of the organization through outreach and engagement in public events,

-Contribute to policy dialogue on the UNFCCC agenda, promote the research and education program of UNU-IAS focused on climate change and sustainable development, and implement the postgraduate degree specialization on the Paris Agreement.

-Carry forward the outcome of the “Third Global Conference on Strengthening Synergies between the Paris Agreement on Climate Change and the 2030 Agenda for Sustainable Development” celebrated in Tokyo in July 2023 and,

-Conduct a study on the latest policy trends on the synergy between biodiversity and climate change.

To achieve the above objectives, the UNU-IAS delegation organized official side events such as “Transformative Pathways for Climate Action through Citizen Science and Youth empowerment” with UNESCO–UNU, “Actions to Strengthen Synergies between the Paris Agreement on Climate Change and the 2030 Agenda for Sustainable Development” at Japan Pavilion, “Beyond Classrooms: Education as a mechanism for community climate action” at the Action HUB; and a  Press Conference entitled “UNU-IAS contribution to youth empowerment for implementing Paris Agreement and SDGs.” among others.

Dr. Juan Pastor Ivars actively contributed to the above-stated events. For example,  in the UNU-IAS press conference, he explained the OUIK model for localizing sustainability agendas by engaging youth and other community stakeholders, achieving a significant impact on the region’s sustainable development, providing valuable knowledge and insights to support progress on global agendas. Furthermore, he contributed to the UNFCCC Resilience Frontiers pavilion, discussing the eight paths for a better world, focusing on transforming humanity’s relationship with nature, and applying a holistic, ecosystem-centered approach to optimize future health and well-being. This participation followed the one done in Botswana in August (https://ouik.unu.edu/news/6141).

Lastly, he had the chance to exchange with diverse experts and stakeholders in his field and create new contacts that will help disseminate and build partnerships globally to strengthen OUIK and SUN project outreach. In his words, COP 27 has been a very enriching experience to see and understand many of the mechanisms and negotiations of the parties and member states. The enthusiasm of the observers supporting the climate action discussion gave him the feeling that a diverse and interdisciplinary world community is genuinely trying to face climate change by integrating the youth for a better world.